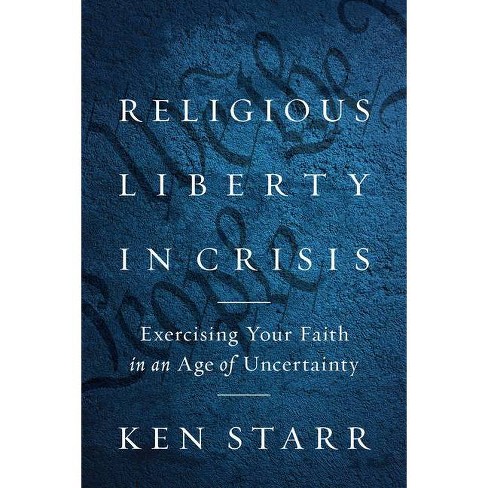 "Now, more than ever, religious beliefs and practice are under assault. But the enduring principles of American liberty can protect "We, the People" from the onslaught"--

What was unfathomable in the first two decades of the twenty-first century has become a reality. Religious liberty, both in the United States and across the world, is in crisis.

As we navigate the coming decades, We the People must know our rights more than ever, particularly as it relates to the freedom to exercise our religion. Armed with a proper understanding of this country's rich tradition of religious liberty, we can protect faith through any crisis that comes our way. Without that understanding, though, we'll watch as the creeping secular age erodes our freedom. In this book, Ken Starr explores the crises that threaten religious liberty in America. He also examines the ways well-meaning government action sometimes undermines the religious liberty of the people, and how the Supreme Court in the past has ultimately provided us protection from such forms of government overreach. He also explores the possibilities of future overreach by government officials. The reader will learn how each of us can resist the quarantining of our faith within the confines of the law, and why that resistance is important. Through gaining a deep understanding of the Constitutional importance of religious expression, Starr invites the reader to be a part of protecting those rights of religious freedom and taking a more active role in advancing the cause of liberty.

"Seasoned, wise, magisterial, and gracefully written--a comprehensive judge's tour of the religious-freedom horizon. After 400 years as America's 'first liberty, ' freedom of religion and conscience is under unprecedented assault, and Ken Starr's overview is essential for all who would make their stand with a depth of understanding as well as courage." --Os Guinness, author of Last Call for Liberty

"What does the Constitution have to say about religion and religious liberty? How has the US Supreme Court interpreted what the Constitution says? Where has the court gotten it right? Where have the justices erred--and why? Ken Starr, drawing on his experience as a lawyer who has argued some of the most important religious-freedom cases, answers these questions in this marvelously lucid and readable book."--Robert P. George, McCormick Professor of Jurisprudence, Princeton University "For many years, the United States has led efforts to reverse what has become a full-blown global crisis in religious freedom, as invidious discrimination and violent persecution spread to almost every region of the world. Now comes a major new work by one of America's foremost authorities on religious freedom, Judge Ken Starr, to warn us that America is facing its own crisis. The nation where religious liberty was once considered 'the first freedom' is now experiencing growing hostility to religion among its culture-forming institutions and its political elites. With powerful arguments and winsome prose, Judge Starr explains why America cannot afford the loss of religious freedom. Read Religious Liberty in Crisis, and you'll understand why the stakes could not be higher--for America, or for the world--and how we all, religious or not, must be a part of the solution."--Thomas Farr, president, Religious Freedom Institute "Judge Starr's book is elegantly written and an excellent summary of religious freedom in America. Covering all of the major cases, yet presenting them as the stories they are, he also includes his own personal involvement in some of the biggest cases in our nation's history, making this book a fascinating read that all will enjoy. It is both a celebration and a warning to all Americans who care about religious freedom." --Kelly Shackelford, Esq., president and CEO, First Liberty Institute "My friend, Ken Starr, decided to tackle the challenging topic of religious freedom. I encourage everyone to take this opportunity to learn from one of the greatest legal minds in our country and empower themselves with the facts to push back against the misinformation in our classrooms."--Charlie Kirk, founder and president, Turning Point USA "Ken Starr has been a friend of mine for years. I haven't just heard about what Ken believes to be true about his faith, I've seen it in the way he loves God, his beautiful family, and his neighbors, both near and far away. In this book, Ken takes us on a meaningful and heartfelt journey. He reminds us of where we have been as a country, and points toward a bright future which is available to us if we have the courage to pursue it. This book contains some hard truths, delivered by a profoundly kind and knowledgeable man."--Bob Goff, author of New York Times bestsellers Love Does, Everybody Always, and Dream Big, and honorable consul for the Republic of Uganda to the United States. "I knew this book would be informative. After all, Ken Starr is the author. He is one of the most reliable sources of policy truth in our country. I knew this book would be relevant. The question of religious liberty is increasingly up for grabs. What I didn't expect, and was pleased to discover, is that this book is a page turner! A person needn't be a law school graduate or policy nerd to get caught up in the conversation of these chapters. Second only to a dinner with Ken Starr himself, this book is the best opportunity for a fresh look at an essential topic."--Max Lucado, Pastor and New York Times bestselling author

Ken Starr has had a distinguished career in academia, the law and public service. Starr writes articles and books of interest and serves as a commentator for Fox and various news programs. Starr has argued 36 cases before the U.S. Supreme Court, including during his service as U.S. Solicitor General. Starr earned his B.A. from George Washington University, an M.A. from Brown University, and his J.D. from Duke University Law School. Starr is author of First Among Equals: The Supreme Court in American Life; Bear Country: The Baylor Story; and his most recent book, Contempt: A Memoir of the Clinton Investigation (a New York Times best seller in 2018). Starr has received numerous honors and awards, including the Edmund Randolph Award for Outstanding Service in the Department of Justice and three honorary doctorates. He and his wife Alice have been married since 1970 and live in Waco, Texas. They are blessed with three children and eight grandchildren.