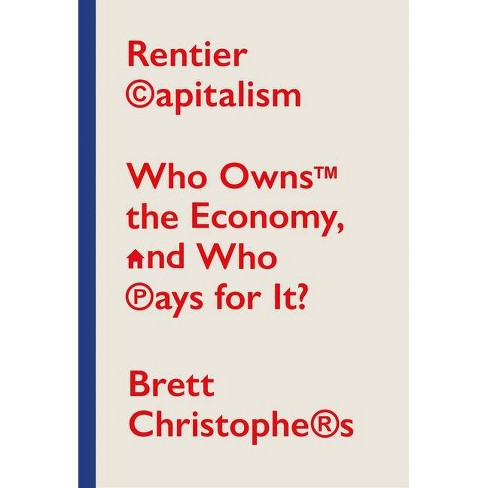 $29.99
new at target¬
0 out of 5 stars with 0 reviews
be the first!be the first! ratings
Help us improve this page

"Our economic present is supposed to be characterised by free markets, unleashed creative entrepreneurship, the control of knowledge, and globalisation of production. Yet as Brett Christophers shows in this incisive and vital study, the supposedly long-dead rentier is the characteristic capitalist of our age, not the entrepreneur of neoliberal theory. Thinking beyond the clichï¿½s, and the standard statistical summaries of the economy, he shows that instead of entrepreneurs there are exploiters of ownership and control who underinvest in the future. The new rentiers are everywhere, passively piling up the returns accruing from investments, from land, from housing, monopolistic utilities, consumer credit, and the control of platforms, natural resources and long-term contracts."
--David Edgerton, author of Rise and Fall of the British Nation "Empirically rigorous and theoretically insightful, Rentier Capitalism is a fascinating contribution to the debate on the changing face of British capitalism. Christophers makes a clear and compelling case that the profits of some of the largest British corporations stem not from production itself, but from their ability to exploit their control over critical resources to extract economic rents."
--Grace Blakely, author of Stolen "Empirically rich and theoretically astute, Rentier Capitalism offers a definitive account of a central feature of neoliberal capitalism: the resurgent power of unproductive assets. Spanning finance, housing, fossil fuels and the public sector out-sourcing racket, this will be a vital resource for anyone seeking to make sense of economic inequality and injustice in the UK and beyond."
--Will Davies "In this eye-opening, wide-ranging, and pedagogical book, Brett Christophers reveals the outsized role that rents play in today's economy--from natural resources to intellectual property, from land to finance, from infrastructure to digital platforms. This is a must-read for anyone interested in understanding modern-day capitalism."
--Gabriel Zucman coauthor of The Triumph of Injustice
If the item details above aren’t accurate or complete, we want to know about it. Report incorrect product info.