Rescue Board - by Rebecca Erbelding (Paperback) 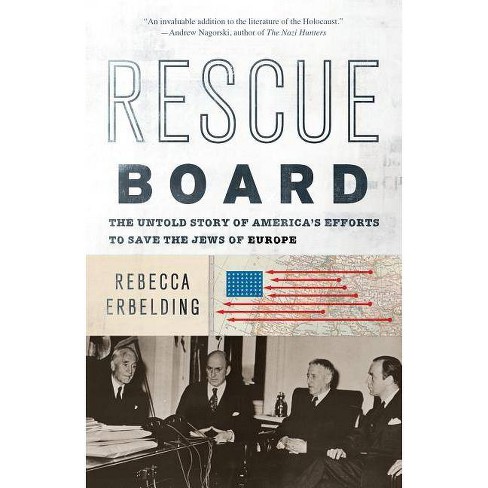 "An invaluable addition to the literature of the Holocaust." --Andrew Nagorski, author of The Nazi Hunters and Hitlerland

"A landmark achievement, Rescue Board is the first history of the War Refugee Board. Meticulously researched and poignantly narrated, Rescue Board analyzes policies and practices while never losing sight of the human beings involved: the officials who sought to help and the victims in desperate need. Top-notch history: original and riveting." --Debórah Dwork, founding director of the Strassler Center for Holocaust and Genocide Studies, Clark University, and coauthor of Flight from the Reich: Refugee Jews, 1933-1946 "Erbelding writes vividly of intrigue and espionage, secret negotiations, money laundering, ransoming of victims, and rescue ships . . . [Her] history is an important contribution to understanding America's humanitarian efforts during and after WWII and a timely perspective." --Booklist "Engagingly written, Rescue Board homes in on the individuals who managed to save the lives of tens of thousands of Jews in Nazi-occupied countries. A must-read for anyone concerned with the refugee crises of World War II and today." --Marion Kaplan, author of Between Dignity and Despair: Jewish Life in Nazi Germany "A fine work of scholarly detection, turning up a story that deserves to be much better known." --Kirkus Reviews "Erbelding's account--both infuriating and inspiring--reveals an unnervingly timely history. This important book, taut as a thriller and historically authoritative, deepens our understanding of the American response to the Holocaust as well as the excruciating obstacles and crucial opportunities confronting citizens committed to saving victims of war and genocide." --Atina Grossmann, author of Jews, Germans, and Allies: Close Encounters in Occupied Germany "If it were not based on real events, Rescue Board would rank as a first-rate thriller. This meticulously researched book tells the story of the race to save lives and cut through the cumbersome bureaucracy, hard-hearted officials, the fog of war, and the competing interests that impeded progress." --The Beacon "This first book-length history of the [War Refugee Board] marks an important contribution to the history of the Holocaust, particularly as it relates to America's belated but vital efforts to stop it" --Publishers Weekly "A brilliantly researched story, Rescue Board is also a disturbing reminder--especially relevant today--that anti-immigrant bigotry has vied continually with tolerance for control of our nation's soul. In Erbelding's retelling, the War Refugee Board is a historical lodestar for a future America trying, hopefully, to recover its role as a moral leader." --Martin J. Sherwin, Pulitzer Prize-winning coauthor of American Prometheus: The Triumph and Tragedy of J. Robert Oppenheimer
If the item details above aren’t accurate or complete, we want to know about it. Report incorrect product info.