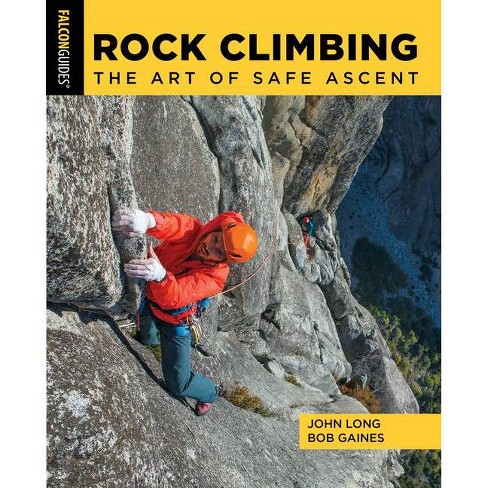 Written by world renowned rock climbers and veteran Falcon authors John Long and Bob Gaines, this comprehensive volume will be the go-to resource for the necessities of rock climbing safety. By stressing both fundamentals and state-of-the-art techniques, it will be a great resource for both beginners and experienced climbers looking to brush up on their skills.

John Long is an acclaimed rock climber and author of more than forty books, including several in Falcon's catalog. He is one of the most prolific adventure writers out there and has authored magazine articles, screenplays, documentary films, and television and movie scripts, as well as instructional rock climbing books. Beginning in the mid-1970s with his historic one-day ascent of the Nose route on El Capitan, Long became a mainstay in the world of extreme sports and adventure. He and his elite group of climbers, the "Stonemasters", ushered in a new era of big wall climbing with their epic climbs in Yosemite National Park and elsewhere. In the years that followed, John Long transitioned from rock climbing to international exploration, traveling around the world from the jungles of Southeast Asia to the North Pole. Some of his many achievements include the first coast-to-coast traverse of Borneo and the discovery and exploration of the world's largest river cave. John Long has also built a successful television and film career, producing the International Guinness Book of World Records television show before moving to feature films. The Sylvester Stallone movie, Cliffhanger, is based on one of Long's stories. He lives in Venice, California. Bob Gaines began rock climbing at Joshua Tree in the 1970s. Since then he has pioneered over 400 first ascents in the park. Bob began his career as a professional rock climbing guide in 1983 and is the owner of Vertical Adventures Rock Climbing School, which offers classes and guided climbs at Joshua Tree. Vertical Adventures was voted the #1 rock climbing school in America by Outside magazine. Bob has worked extensively in the film business as a climbing stunt coordinator. He has coordinated more than forty television commercials, and he was Sylvester Stallone's climbing instructor for the movie Cliffhanger. Bob doubled for William Shatner in the movie Star Trek V, as Capt. Kirk free-soloing on El Capitan in Yosemite. Bob is an AMGA Certified Rock Climbing Instructor and is the coauthor of Rock Climbing: The AMGA Single Pitch Manual, the textbook for the AMGA's single pitch instructor program. He has worked extensively training U.S. military special forces, including U.S. NavySEAL Team 6, and is known for his technical expertise in anchoring and rescue techniques. Bob is also the author of Best Climbs Tahquitz and Suicide Rocks, Toproping, Rappelling, and Advanced Rock Climbing and is coauthor of Climbing Anchors and the Climbing Anchors Field Guide (with John Long). Bob's other passion is fly fishing. He currently holds eleven International Game Fish Association world records. He lives in Irvine, California.
If the item details above aren’t accurate or complete, we want to know about it. Report incorrect product info.