Rooting for You - by Susan Hood (Hardcover) 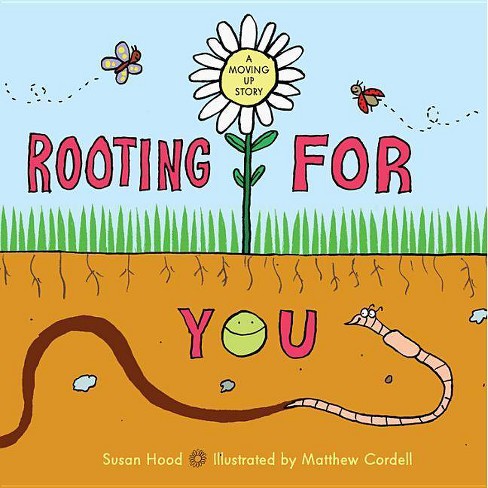 A seed, afraid but bored in the dark soil, decides to put out one little root, then one little shoot, before learning that there are plenty of friends around for encouragement.

It's time for one little seed to come out of his shell. But he's afraid. It's a big world out there. There may be dangers! (Like monsters!) There are definitely obstacles. (Like rocks!) And while there's a good deal of uncertainty, he discovers that he has friends to help guide him on his way and root for him to have his day in the sun.

"I am NOT coming out!" announces a tiny green seed: it's plenty safe deep in the ground, and who knows what's lurking out there in the dirt, digging in the dark? Of course, playing it safe is pretty boring, so maybe the seed will just stick out one little root . . . and maybe just a shoot, too. A pebble proves to be a temporary setback, but an affable, bespectacled earthworm offers some encouragement, giving the developing daisy the boost it needs to get past the surface and unfurl into its full flowery self. The story is simple, and the worm's gentle rhymes keep a pleasant rhythm going: "There are friends to feed you, / friends to weed you, / and friends indeed who/ really need you." The full-page flaps that unfold as the flower sprouts add some suspense, and they also the increase the fun for use in lapsits or storytimes, as does the book's vertical format as the daisy grows and grows. Cordell's scrawling illustrations temper the earnestness of the inspiration, and the rich, earthy palette necessary for the worm and the dirt is balanced by the jellybean purples of nearby beetles and greens of the foliage above ground; the seed's round face shows just how worried two lines and a dot can make a face look. This would make a fine book for personal sharing with younger ones, and the intrepid might consider pairing it with Donaldson's Superworm (reviewed above) for a squirmy storytime. TA BCCB"

"I am NOT coming out!" says a tiny lime-green seed nestled deep within the warm brown earth. Because, really, who knows what awaits in the world above? But with the encouragement of an astute, bespectacled worm ("There are friends to feed you, / friends to weed you, / and friends indeed/ who really need you!") and the visual propulsion provided by a series of sweetly comic gatefolds (including one that's both horizontal and vertical), the seed overcomes the real and perceived obstacles in its path and triumphantly assumes its role as the garden equivalent of a BMOC. Hood's (Spike, the Mixed-up Monster) writing occasionally slides into graduation speech territory ("Get going, get growing!/ Your whole life awaits!"), but between the worm's cheerleading and Cordell's (hello! hello!) cheery, minimalist cartoon evocation of the underground world, the seed's journey feels like a real accomplishment. Of course, any relationship between the seed's emergence and that of a human baby are strictly coincidental. Ages 3 5. PW"

A flower-to-be, looking like a green pea and behaving just like a human preschooler, voices its fears about its inevitable transformation. There's the dark. ("You never know / who might be digging / in the DARK.") There's the equally scary-seeming light looming above. With bona fide impediments like rocks and spiders popping up, young readers should develop real empathy for the little plant during its complex transit. A bespectacled worm offers encouragement and reassurance, flanked by ants and beetles. "There are friends to feed you, / friends to weed you, / and friends indeed who / really need you!" A series of gatefolds serves to reinforce the sense of expansiveness of soil and, later, blue sky, as the seed-turned-sprout grows into a towering, daisylike flower. Cordell uses a flat, matte color palette of browns, greens, worm-pink and sky blue, with thick black line for details. He preserves the plant's personality throughout its growth spurt, successively using the same pale green hue and facial expressions for the seed, sprout and the flower's center. Hood's rhyming text is charming, but the final gatefold, a full three pages tall, must be folded away and turned before its verse can be concluded on the final spread-a slight detraction from the flow. As sweet and benign as a summer daisy. (Picture book. 3-5) Kirkus"

K-Gr 2 A story about a seed's journey from sprout to bloom. A nervous daisy seed, "safe and sound, /down/down/down/here in the ground," finally becomes bored and decides to begin his travels through soil, meeting a helpful worm and bravely passing a menacing spider. Some pages fold up or out, immersing readers in this underground world. The seed has an expressive, wide mouth and active eyebrows that display trepidation at first, then pride. Peppered with plenty of sound effects ("Youch! Bonk."), Hood's loosely rhyming story focuses on the friendly symbiosis of living things without any scientific words outside in the "soft warm skies," says the worm, "There are friends to feed you, /friends to weed you, /and friends indeed who/really need you!" Young readers will enjoy the novelty of the format and will relate to the seed's childlike fear of spiders and darkness. Nora Clancy, Teachers College Community School, New York City SLJ"

Susan Hood (www.susanhoodbooks.com) has worked for Nick Jr., Scholastic, and Sesame Street and is the author of Mission: New Baby, Top Secret Info for Big Brothers and Sisters, illustrated by Mary Lundquist, The Fix-It Man, illustrated by Arree Chung; Spike, The Mixed-Up Monster, illustrated by Caldecott Honoree Melissa Sweet; and The Tooth Mouse, illustrated by Janice Nadeau. She lives in Connecticut with her husband and two daughters. Matthew Cordell (www.matthewcordell.com) has illustrated more than a dozen picture books including Special Delivery by Philip C. Stead, What Floats in a Moat by Lynne Berry as well as several he has written himself, like New York Times Notable Best Picture Book Hello! Hello!, Another Brother, and Wish. He lives in Chicago with his wife, author Julie Halpern, and daughter and a son.
If the item details above aren’t accurate or complete, we want to know about it. Report incorrect product info.