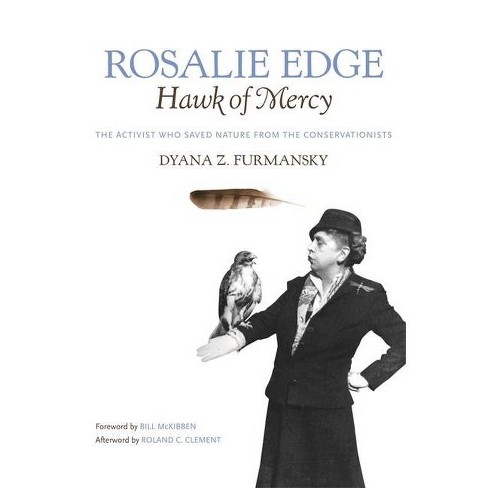 Rosalie Edge (1877-1962) was the first American woman to achieve national renown as a conservationist. Dyana Z. Furmansky draws on Edge's personal papers and on interviews with family members and associates to portray an implacable, indomitable personality whose activism earned her the names "Joan of Arc" and "hellcat." A progressive New York socialite and veteran suffragist, Edge did not join the conservation movement until her early fifties. Nonetheless, her legacy of achievements--called "widespread and monumental" by the New Yorker--forms a crucial link between the eras defined by John Muir and Rachel Carson. An early voice against the indiscriminate use of toxins and pesticides, Edge reported evidence about the dangers of DDT fourteen years before Carson's Silent Spring was published.

Today, Edge is most widely remembered for establishing Hawk Mountain Sanctuary, the world's first refuge for birds of prey. Founded in 1934 and located in eastern Pennsylvania, Hawk Mountain was cited in Silent Spring as an "especially significant" source of data. In 1930, Edge formed the militant Emergency Conservation Committee, which not only railed against the complacency of the Bureau of Biological Survey, Audubon Society, U.S. Forest Service, and other stewardship organizations but also exposed the complicity of some in the squandering of our natural heritage. Edge played key roles in the establishment of Olympic and Kings Canyon National Parks and the expansion of Yosemite and Sequoia National Parks. Filled with new insights into a tumultuous period in American conservation, this is the life story of an unforgettable individual whose work influenced the first generation of environmentalists, including the founders of the Wilderness Society, Nature Conservancy, and Environmental Defense Fund.
If the item details above aren’t accurate or complete, we want to know about it. Report incorrect product info.