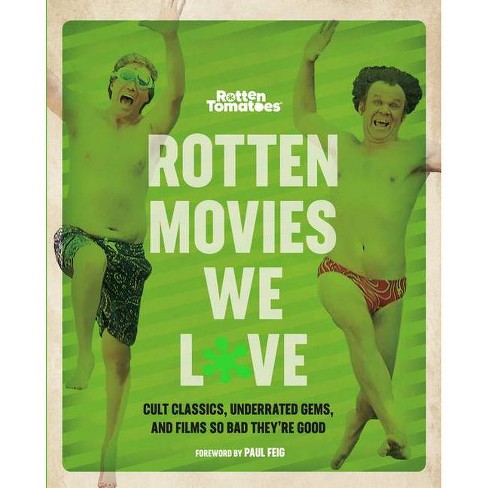 Hook. Wet Hot American Summer. Valley of the Dolls. There are some movies that defy traditional critical assessment -- films that are panned by reviewers, but that go on to become beloved classics and cult phenoms anyway. Ever been crushed to learn your favorite movie -- or a new one you're dying to see -- has been given the big green splat from Rotten Tomatoes' infamous Tomatometer? The site's editors stand by their critics and scores, but they also feel your pain: Fresh films shouldn't get all the glory! In Rotten Movies We Love, the RT team celebrates 101 Rotten movies that can't be missed, including:
Featuring 16 essays from some of the world's most well-known film critics -- Leonard Maltin, Terri White, Amy Nicholson, David Fear, K. Austin Collins, and more -- and punctuated with black-and-white film stills and punchy graphics, it's a fun romp through the quirkier corners of film history, sure to delight any cinephile or pop-culture fanatic.

Rotten Movies We Love will shine a light on underrated movies you've never heard of and remind you of the movies that you loved in the theater, hated on the way home, but quoted for the next decade. Some of my favorite movies are in this book.
--Emily V. Gordon, co-writer of The Big Sick

Ironically I'm refusing to read this book until I know its Rotten Tomatoes score. But I'm pretty sure I'll love it!
--Jimmy Fallon, comedian, actor, and host of The Tonight Show Starring Jimmy Fallon

Rotten Tomatoes is the leading online aggregator of movie and TV show reviews from professional critics, making it the most comprehensive guide to what's fresh
If the item details above aren’t accurate or complete, we want to know about it.

With Inky Blots and Rotten Parchment - by Ian Hopton (Paperback)