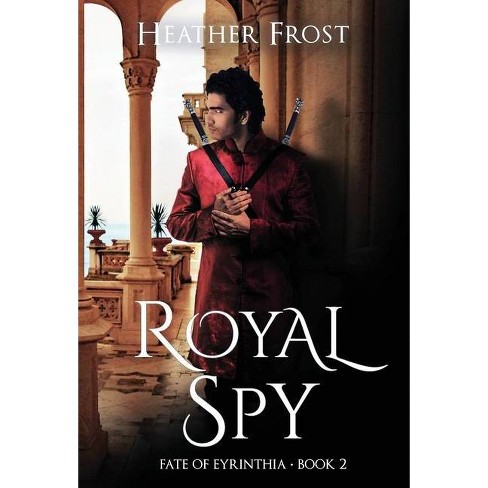 A DECOY recruited to be a spy. A PRINCE compelled to become an assassin. A SERJAH pressured by an unwanted crown. A WORLD covered in shadows.

A DECOY recruited to be a spy.

A PRINCE compelled to become an assassin.

A SERJAH pressured by an unwanted crown.

A WORLD covered in shadows.

Mere months ago, Clare was just a kitchen maid. Now, she is a decoy for Princess Serene and a novice spy, caught in the royal family's web of secrets. While journeying to Mortise to finalize the princess's betrothal to Serjah Desfan, Clare lives for the stolen moments she has with Bennick, the bodyguard who is quickly claiming her heart. But when a notorious assassin is hired to kill her, Clare's life and the alliance hang in the balance.

In Ryden, Grayson prepares to leave for Mortise with his brother, Liam. Their orders are to ignite a war between their enemies, and Grayson has been tasked with assassinating Princess Serene. It may cost his soul, but he is ready to comply, as long as he gets something in return: freedom for Mia, the girl he loves. But the more time he spends with his brother, the more he begins to wonder if Liam is what Grayson wishes he had the courage to be . . . a traitor.

Desfan feels trapped. By his disapproving council, his impending marriage to a stranger, and the imminent arrival of enemy princes who may not want the peace they profess. When a dangerous drug threatens his people, Desfan jumps at the chance to rely on his swords instead of politics. But his investigation uncovers more than he bargained for--a plot that may destroy Mortise from within.

Eyrinthia hovers on the edge of war. Spies. Rebels. Traitors. All must choose a side.

"Royal Spy is a breathtaking page turner that leaves you wanting more! Frost has outdone herself with her irresistible characters and fascinating backdrop of Eyrinthia. This is a must-read for any fantasy lover!" - Author Ashley I. Hansen on Royal Spy

"Royal Spy is a gripping story with strong, powerful characters. Excitement, betrayal, love with every turn of the page in this heart pounding adventure. I couldn't put it down!" - Min Reads and Reviews (Mindy) on Royal Spy

"Reuniting readers with favorite characters and introducing them to new friends who jump off the page, Royal Spy is an immersion in exotic lands with richly detailed cultures. Frost effortlessly weaves a tale of adventure wrapped in romance, intrigue, and humor that leaves you anxious for more. An exhilarating read!" - Author Rebecca McKinnon on Royal Spy

"Heather Frost is a force to be reckoned with! This is quite honestly my favorite Indie author series. Hands down, the best. ...So many twists, turns and puzzle pieces, it truly makes Frost one of my favorite authors!" - Author Sarah Hill on Royal Spy

"Heather Frost can write complex characters like nobody's business! ...[This] series is a hidden gem that I want to shout from the rooftops. If you are a fan of fantasy, this is a series that you need in your life." -Book Briefs on Royal Spy

"Action-packed, emotionally involving, and simply astonishing...Colour me intrigued, this book left me at the edge of my seat and I need to know what happens next really bad!" - Darkest Sins (Silvia) on Royal Spy

"From her very first book, Heather Frost has delivered solid and vibrant characters and complex stories full of mystery and romance, and Royal Spy is no exception. ...Excellent for anyone looking for an adventure that will stick with you for years to come." - Author Dana LeCheminant on Royal Spy

"...Everything was perfect about this book. The story was beautifully written with an amazing world, characters, and plot twists. This is one of my favorite books of the year and if you haven't started reading the books then I have no idea what you are doing. Perfect for those who love royals and Sarah J. Mass." - Thindbooks on Royal Spy