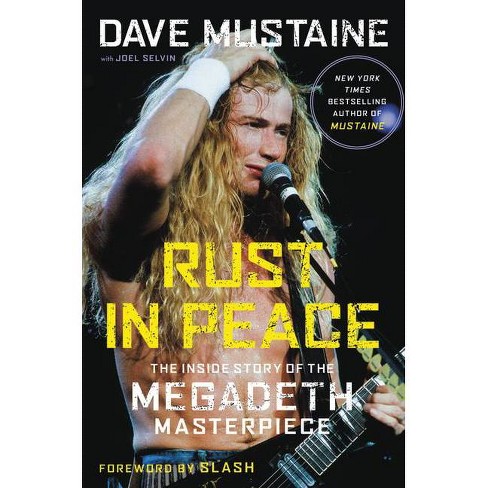 $16.99
new at target¬
undefined out of 5 stars with 0 reviews
be the first!be the first! ratings
Help us improve this page

FEATURING A FOREWORD BY SLASH
A new book by the lead vocalist and guitarist of Megadeth, the original lead guitarist of Metallica, and the author of the NYT bestseller, Mustaine.
Rust in Peace details the making of Megadeth's iconic record, which was released in 1990, at an incredible time of flux and creativity in the rock world. Relayed by the lead vocalist and guitarist of Megadeth himself, Dave Mustaine, the book covers the process of hiring the band and supporting cast, of trying to handle the ensuing success, and ultimately the pressure of fame and fortune -- which caused the band to finally break-up. In short, it's a true story of groundbreaking anti-pop that was moving toward the mainstream (or the mainstream that was moving toward the band), at a time of great cultural change, power, ego, drugs, and other vices that went hand-in-hand with Rock N' Roll, circa the late eighties-early nineties.
Little did Mustaine know that the birth pangs of the record were nothing compared to the oncoming pain and torment that would surround it. Alcohol, drugs, sex, money, power, property, prestige, the lies the band was told by the industry -- and the lies they told each other -- were just beginning, and much like rust in real life, these factors would ultimately eat away at the band's bond until only the music survived.
Rust in Peace is a story of perseverance, of scraping off the rust off that builds over time on everything: ourselves, our relationships, pop culture, art, and music.
If the item details above aren’t accurate or complete, we want to know about it. Report incorrect product info.