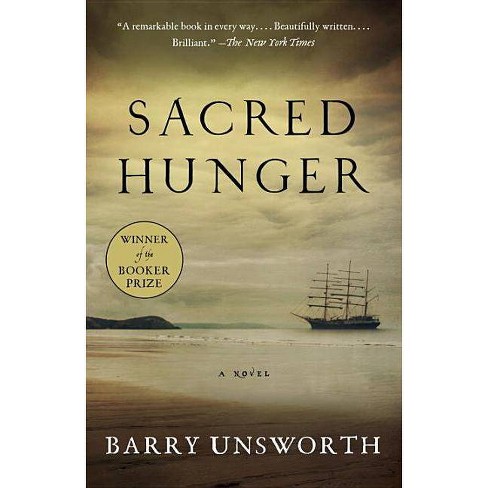 $13.49
MSRP$17.95
no reviews yet
be the first!be the first! ratings
Shipping
Free standard shipping with RedCard
Help us improve this page

"A remarkable novel in every way. . . . Beautifully written. . . . Brilliant." --The New York Times "Brilliantly suspenseful. . . . A masterly meditation on how avarice dehumanizes the oppressor as well as the oppressed." --Chicago Tribune "Completely absorbing in its irony, its striking imagery, its fully realized characters and its sure and complex moral touch." --The Boston Globe "Utterly magnificent." --The Washington Post "Wonderful and heartbreaking. . . . A book of grace and meditative elegance, and of great moral seriousness." --The New York Times Book Review

"Sacred Hunger triumphs on two levels: as a rippingly good historical drama and as a serious moral tale. All the surface pleasures of the former--stirring adventure passionate characters, epic length, a carefully detailed look at a long, lost world--combine brilliantly with the richness of the latter. No wonder the Book Prize committee chose to honor it." --The Seattle Times

"Like Conrad, Unsworth is a novelist whose work is dense with plotting and pacing, and rich in both writing and sheer storytelling." --Newsday

"[Unsworth] has given us a real, sweating, breathing, bleeding, complex world, a world in which blacks sell other blacks into slavery and whites flog and cheat each other to turn a profit, and a few heroic men and women of both races struggle toward justice against the prevailing social values and their own fears and doubts." --Los Angeles Times

"Superb. . . . Magnificent. . . . at once an adventure novel, a novel of idea, and a novel of richly realized character." --Buffalo News

"[Sacred Hunger] has an obvious brilliance which will cast its own light. . . . A magnificent novel." --The Sunday Telegraph (London)
If the item details above aren’t accurate or complete, we want to know about it. Report incorrect product info.