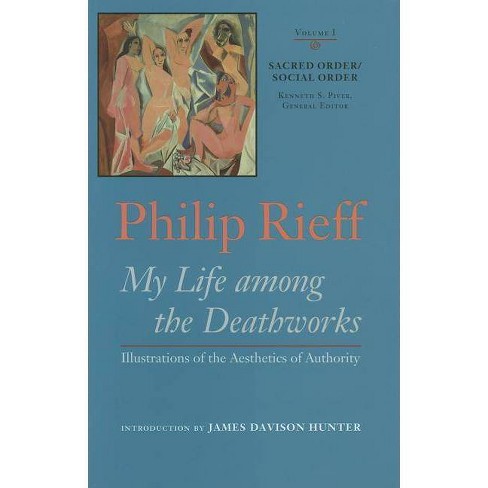 $43.99
no reviews yet
be the first!be the first! ratings
Shipping
Free standard shipping with RedCard
Loading, please wait...
Help us improve this page

With My Life among the Deathworks: Illustrations of the Aesthetics of Authority, the renowned cultural theorist and Freud scholar Philip Rieff inaugurates a trilogy that signals the summation of his scholarly lifework. With this series, Sacred Order/Social Order, to be published in consecutive volumes, Rieff both continues and supersedes the lines of thought that characterize the earlier, influential works upon which his reputation was forged. Readers familiar with Rieff's distinctive oeuvre will recognize central themes and find final recitations on the cultural impact of Freud and his creation "psychological man" or "the therapeutic," which Rieff here renames the "new man." Whether conversant with Rieff's work or new to its unique interpretive power, readers of Sacred Order/Social Order will discover a series of provocative insights, illuminated by Rieff's wide-ranging expositions, theoretical advances, and stylistic innovations.

In this first volume, Rieff articulates a comprehensive, typological theory of Western culture. Using visual illustrations and unique juxtapositions, he displays remarkable erudition in drawing from such disciplines as sociology, history, literature, poetry, music, plastic arts, and film; he contrasts the changing modes of spiritual and social thought that have struggled for dominance throughout Western history. Our modern culture--to Rieff's mind only the "third" type in western history--is the object of his deepest scrutiny, described here as morally ruinous, death-affirming rather than life-affirming, and representing an unprecedented attempt to create a culture completely devoid of any concept of the sacred.

For Rieff, culture represents the "form of fighting before the firing begins" in a literal life-and-death struggle for a particular type of world-creation. Having concluded in this final phase of his career that there is no neutral ground in this struggle, Rieff takes aim at many of the most significant "deathworks" in modern literature, art, and history--from Joyce's Finnegans Wake and Duchamp's Etant donnï¿½s to Hitler's death camps--in an attempt to undo them by using them against themselves. In so doing, he seeks to show the reader what really animates, and is ultimately at stake, in the contemporary "culture wars" raging over such issues as euthanasia, education, medical research, sexuality, race, class, and gender.