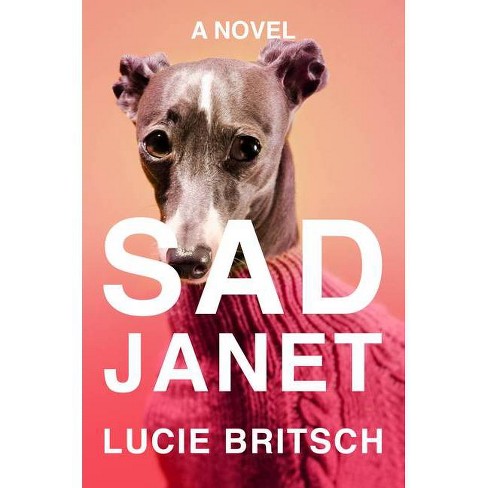 $19.99
new at target¬
0 out of 5 stars with 0 reviews
be the first!be the first! ratings
Help us improve this page

"A gentle, yet precise probe into the nature of melancholia . . . Sad Janet is a strangely exuberant meditation on sadness; Britsch articulates the conflicting comforts and pains of depression in a distinctively memorable, wise way." -- Refinery29 "Funny and touching and highlights some very real truths about what it means to be a sad woman in our world." --Hey Alma

"A searing, comedic and accessible take on depression and personality, Sad Janet delivers a comforting message about the value of individuality." --Shelf Awareness "The narrative voice of Janet in Britsch's debut novel is a skin-tingling combination of new and necessary. . . . This book and this character are radical, and readers are likely to feel a relief at reading the thoughts they've had but not spoken." --Booklist (starred review) "Britsch's monologue about the experience of unhappiness is undeniably infectious." --Publishers Weekly "Lucie Britsch has crafted a biting, pitch-perfect novel about one woman's desire to stay true to herself in a world that rewards facile happiness. Hilarious, wise, wicked, and tender, Sad Janet is a dazzling debut and Britsch a singular and necessary new voice." --Cynthia D'Aprix Sweeney, New York Times-bestselling author of The Nest "I know sad Janet. Sometimes I am sad Janet. At some point in our lives, we could all be a Janet. In her wonderful debut novel, Lucie Britsch celebrates a formerly unheralded state of being: sadness. Embrace your sadness, watch TV, pet a stray dog, masturbate, don't answer the phone. And if you don't feel like taking that pill, try reading Sad Janet instead. It might make you happy." --Marcy Dermansky, author of Very Nice "In Sad Janet, Britsch has created a slacker heroine with the exuberant weariness of a Melissa Broder poem and the provocative non-conformism of an Ottessa Mosfegh character. From her pulpit in the anarchist dog shelter that also shelters her, Janet has veracious and darkly comic things to say about the real cost of artificial glee. A timely and trenchant debut." --Courtney Maum, author of Costalegre "Sad Janet is a tragicomic riot of a book--charging, foul-mouthed and tender, across the modern condition. It is an hysterically funny and slyly moving defense for feeling all there is to feel in a medicated world. Lucie Britsch's outcast heroine, Janet, is the dog-whispering, post-Goth cousin to Phoebe Waller-Bridge's Fleabag. Terrifying, glorious, and one for the ages." --Claudia Dey, author of Heartbreaker and Stunt
If the item details above aren’t accurate or complete, we want to know about it. Report incorrect product info.