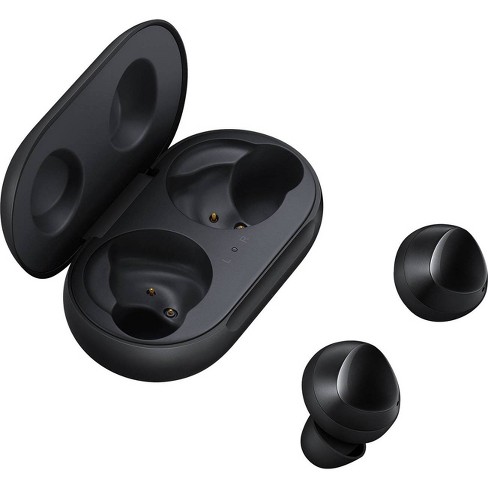 Just pop open and pair. Galaxy Buds work right out of the box, connecting with your Galaxy devices in an instant via Bluetooth to get you up to the beat and well on your way
Acoustic specialists sound by AKG have tuned Galaxy Buds to deliver incredibly rich, High Resolution live sound - dropping you front row at the gig, even when you're not there.
Slip them in your pocket and go. Galaxy Buds feature a newly refined design that makes them so compact they fit in comfortably with the rest of your belongings.
Our next-generation adaptive dual microphone technology makes background noise a thing of the past. Galaxy Buds recognize your surroundings, switching between inner and outer mics to keep unnecessary noise out of your conversation.
Stay in tune with the world around you. Galaxy Buds let you quickly shift your focus to your surroundings without taking them off, so you'll never miss what's coming and going.
Galaxy Buds carry an innovative design introducing ergonomics and incredibly advanced, lightweight materials for a 24/7 fit. This revolutionary slim fit keeps them snug within yourears during all types of activity.
Give yourself the freedom to watch and listen on whichever screen you want. Galaxy Buds let you pair and switch seamlessly between your Galaxy devices so you don't miss out on any of the action.
All the While, Buds high-efficiency micro-battery will keep you immersed in your favorite tunes for up to 6 hours on a single charge. And when you're done, Galaxy Buds connect to device-to-device wireless power-share compatible Galaxy devices. So, your Buds are always ready to go, no matter where you go.
- Just what you want to hear: Turn on Ambient Aware to control how much surrounding noise you let in. with Quick Ambient Mode, you'll be aware of traffic when you're out walking, catch flight announcements and hear when your kids and coworkers call out to you.
- Premium sound by AKG: The sound that moves you is now made to move with you. with sound by AKG, Samsung Galaxy Buds provide a balanced and natural sound with superb dynamic range and exceptional accuracy, which means every word and note you listen to sound stellar.
If the item details above aren’t accurate or complete, we want to know about it. Report incorrect product info.

comfortable good for music listening but.....

3 out of 5 stars
TeresaH - 11 days ago
originally posted on samsung.com

I have used the previous version of these buds and have had to go back to using them because body can ever hear me on these. I wish they were better because they are much more comfortable than it predecessor.
Did you find this review helpful?
Report review

3 out of 5 stars
Apathetik - 22 days ago
originally posted on samsung.com

I just got a pair of these a few days ago to replace a pair of Jaybird X2's that I had for quite a long time. I mostly knew what to expect from the research I did before purchasing. But a few things sneaked past my research. I'll start with the worst offender. The Galaxy Wearable's App. I have an older Samsung Galaxy S5. And while Samsung, and Carrier support for this device has long since past. The specs of the phone, and especially convenience features like being able to easily replace the battery, have kept me from wanting to upgrade to a new model phone. And thanks to a certain custom android OS for the device (which I'm not sure I can mention here?), I've been able to maintain feature upgrades, android version upgrades, and often much faster security updates than both Samsung and my local carriers. So it was much to my surprise when I got the Buds, and went to install the Galaxy Wearable's app on my phone. That I find it would not run because it detected that I was running a modified version of Android. But it turns out, it only performs this check on Samsung Devices. They are effectively punishing only their own customers in this way, which almost made me immediately return these earbuds. I did get it working, by making my phone appear to the app as a Google Pixel. Regardless of this fact though. I find it rather absurd that they only run this check and prevent app usage on their own devices. If there's some security concern about running their app on a custom OS. It should perform that check and not run, regardless of what phone it thinks you're using. But that is not the case. Now that I have the app actually working. I am disappointed with how little functionality I get for all the effort that I put into actually getting it working. The options for customizing the controls are incredibly limited. The fact that I can't have volume and Ambient Sound assigned to the controls at the same time is an absurd limitation (for example, Quick Ambient Sound on left bud, and Volume Down on right bud). I also feel like there are more gestures they could be using and aren't. Such as swipes, 1/2/3 taps THEN hold, instead of just a single tap and hold being the only customizable gesture. They should also include a gesture for locking the touch pads (which currently can only be done via a toggle in the Wearable's app). On to the buds themselves. So far, I mostly like them. The music audio quality is certainly acceptable. But is definitely what you would expect from something their size. I don't talk much on my phone, so I can't speak in regard to call quality. However, the Ambient Sound pass through audio quality is... ok when it picks out the right sounds, but seems to like to pick up humming or hissing noises from the surrounding and pass those through just as much as someone trying to talk to you. Which causes problems hearing occasionally. As far as their physical design, I was hesitant to move to a "True Wireless" design coming from my previous Jaybird X2's that were tethered via a wire between the buds, with in-line controls there. Which allowed me to wear them with the wire hooked over my ear for a more secure fit. So far, they seem to stay in quite well. But there are some design issues that are causing me problems. The wingtips have small slots cut into them on the bottom that act a a key way to ensure you put them on in the correct direction and orientation. Unfortunately, the bud in my right ear fits better when rotated differently than the wingtip is oriented for. But due to the keyed nature, it's really hard to get the wingtip rotated correctly for my right ear.
Did you find this review helpful?
Report review

Stay in my ear. Functionallity is dissapointing.

2 out of 5 stars
Ragingun - 25 days ago
originally posted on samsung.com

Have been using these daily for a month. I love how light weight they are, the charging case, and they do have good sound. The negatives far outweigh the positives. I am currently listening to them and my spotify is playing however the sound has cut out yet again as my music continues to play. This issue is constatnly happening. For high end and specifically Samsung earbuds you'd think they'd offer much more functionality. You have to wear both to use the ambient sound feature, you have to wear both to control the volumes. You can only use the touch feature for one function at a time such as volume, voice command, or to turn on ambient sounds which still doesn't work with just one earbud in. So you can't use voice command without switching the option on your phone first and then using it, well heck I may as well just use my phone then. Even when the touch feature you have programmed is turned to what you want it to be if you don't connect it to your phone the feature doesn't work. In other words I have them connected to my Galaxy 3 frontier watch and none of the touch features work regardless of what you have them set to on the phone app and it's not adjustable via the watch either. Wake up, you make all 3 of these devices. You're epically failing your customers in a world that requires connectivity!!! There are other earbuds out there that have all of these features constantly active.
Did you find this review helpful?
Report review

1 out of 5 stars
CHRISTIAN - 1 month ago
originally posted on samsung.com

I have three pairs and these don't work don't know what's wrong, just stoped working
Did you find this review helpful?
Report review

Hard to keep in ears when sweating

4 out of 5 stars
Mark - 1 month ago
originally posted on samsung.com

These are great for casual wear. But they slip loose of your ears constantly when running and sweating. They also trap all the moisture/sweat inside your ears while using them. It would be nice if there was a better grip while sweating and running and some type of air allowed into the ear canals.
3 guests found this review helpful. Did you?
Report review

3 out of 5 stars
dsx724 - 1 month ago
originally posted on samsung.com

Stuck at 5% and refuses to charge. The charge holder lights up green after 5%.
1 guest found this review helpful. Did you?
Report review

Great headphone to listen to music only

3 out of 5 stars
Samson - 1 month ago
originally posted on samsung.com

These headphones are great for the gym in terms of music and or watching movies on your phone. As for phone calls it is horrible. My family and friends complain about all the background noise it picks up. Most times they hear my background better than they hear me. I bought a new one and it was the same thing. If you want it only for music then perfect buy but if for multi-use use I wouldn't recommend. [This review was collected as part of a promotion.]
2 guests found this review helpful. Did you?
Report review

1 out of 5 stars
Robert - 1 month ago
originally posted on samsung.com

These are by far my favorite wireless earbuds for the size, fit, and ease of use. Would be good if the worked though, right? First set broke. Samsung sent another set. Second set, only one broke. Now I think I am stuck because it has been about a year since the original purchase.
Did you find this review helpful?
Report review