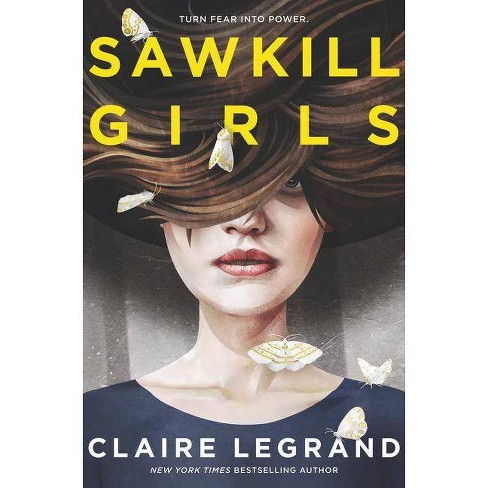 From the author of the Edgar-nominated "Some Kind of Happiness" comes a frightening horror novel about three teenage girls who take on an insidious monster that preys upon young women. "Old-school horror meets fresh, female-forward fury."--Elana K. Arnold, author of the National Book Award finalist "What Girls Are Made Of." 5/16.

"Reader, hang on for dear life. Sawkill Girls is a wild, gorgeous, and rich coming-of-age story about complicity, female camaraderie, and power." --Sarah Gailey, author of River of Teeth

"An eerie, atmospheric assertion of female strength." --Mindy McGinnis, author of The Female of the Species

NAMED ONE OF YALSA'S 2019 BEST FICTION FOR YOUNG ADULTS

From the New York Times bestselling author of Furyborn comes a breathtaking and spine-tingling novel about three teenage girls who face off against an insidious monster that preys upon young women. Perfect for fans of Victoria Schwab and Stranger Things.

Who are the Sawkill Girls?

Marion: The newbie. Awkward and plain, steady and dependable. Weighed down by tragedy and hungry for love she's sure she'll never find.

Zoey: The pariah. Luckless and lonely, hurting but hiding it. Aching with grief and dreaming of vanished girls. Maybe she's broken--or maybe everyone else is.

Val: The queen bee. Gorgeous and privileged, ruthless and regal. Words like silk and eyes like knives; a heart made of secrets and a mouth full of lies.

Their stories come together on the island of Sawkill Rock, where gleaming horses graze in rolling pastures and cold waves crash against black cliffs. Where kids whisper the legend of an insidious monster at parties and around campfires. Where girls have been disappearing for decades, stolen away by a ravenous evil no one has dared to fight...until now.

★"Through this dank, atmospheric, and genuinely frightening narrative, Legrand weaves powerful threads about the dangerous journey of growing up female...an intensely character-driven story about girls who support each other, girls who betray each other, and girls who love each other in many complicated ways. Strange, eerie, and unforgettable." -- ALA Booklist (starred review)

★"This atmospheric, Gothic-flavored chiller, which mingles elements of dark fairy tales and outright horror... includes an asexual character and a beautifully wrought queer romance, [and] focuses on the power of female friendship and what it means to pit women against one another in fiction and in life." -- Publishers Weekly (starred review)

★"Legrand accomplishes the kind of slow-building tension and mounting horror that will give readers night terrors. Read this book, then lock it in the freezer." -- Shelf Awareness (starred review)

"Part spine-chilling horror story and part coming-of-age lesbian romance... If you are looking for something to scare you awake at night, this is the book for you." -- Kirkus Reviews

"With prose as fierce and uncompromising as its three main characters, SAWKILL GIRLS is a fresh and unflinching exploration of female friendship wrapped in a spine-tingling page-turner. Claire Legrand doesn't hold back--and you won't be able to put this book down."
-- - Courtney Summers, New York Times bestselling author of Sadie

"Reader, hang on for dear life. Sawkill Girls is a wild, gorgeous, and rich coming-of-age story about complicity, female camaraderie, and power." -- Sarah Gailey, author of River of Teeth

"An eerie, atmospheric assertion of female strength." -- Mindy McGinnis, author of The Female of the Species

One of Us Is Next by Karen M. McManus (Hardcover)

We All Fall Down - by Natalie D Richards (Paperback)

Nothing More to Tell - by Karen M McManus (Hardcover)

You Know Me Well - by Nina Lacour & David Levithan (Paperback)