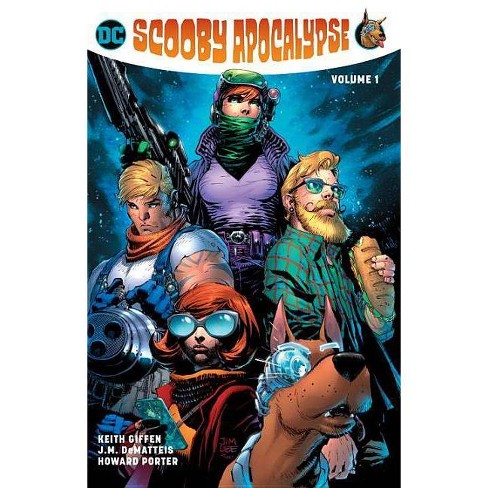 "When the world is tossed into chaos, it's up to a group of meddling kids--Fred, Daphne, Velma, Shaggy, and their dog Scooby-Doo--to solve the mystery and survive hordes of zombies. But can they save the day and cure everyone or will they become brain-eating zombies? The creatures of the night are among us, and the crew of the Mystery Machine has to fight to survive--because in the apocalyptic badlands of the near-future, the horrors are real"--]cProvided by publisher.

Fred. Daphne. Velma. Shaggy. Scooby-Doo. Roaming the globe in their lime-green Mystery Machine, they've solved countless crimes and debunked dozens of sketchy supernatural shenanigans. But what if the horror was real? Something terrible has transformed our world, turning millions of people into mindless zombie hordes. And only five people--well, four people and one mangy mutt--have the smarts, the skills and the sheer crazy courage to stare down doomsday. Can these pesky kids and their canine companion--using every incredible contraption in their arsenal--defeat the evil that has overwhelmed planet Earth? We've got only one thing to say about that: ZOINKS! From comics mastermind Jim Lee and the superstar creative team of Keith Giffen (JUSTICE LEAGUE 3001), J.M. DeMatteis (Justice League Dark) and Howard Porter (JLA) comes Scooby Apocalypse, a whole new spin on the most beloved paranormal investigators in history. Get ready to give Scooby Snacks a whole new meaning! Scooby Apocalypse Volume 1 collects issues #1-6.

"With out-there costumes and psychedelic greens that slide into electric blues, they create a world that looks as 'groovy' as it does near-future." --Comic Book Resources "Howard Porter slinging some of his best ink since the early days of his run on JLA." -- Newsarama

Keith Giffen has provided plotting, scripting, artwork, or any combination thereof for titles such as All-Star Comics, Legion of Super-Heroes, Ragman, Creeper, Lobo, Suicide Squad, The Defenders, Hero Squared!, and, um... Ambush Bug. He's worked on the weekly series 52 and Countdown to Final Crisis, as well as 52 Aftermath: The Four Horsemen and Midnighter, plus a gazillion other things. He also was the illustrator of the new 52 series O.M.A.C.
If the item details above aren’t accurate or complete, we want to know about it. Report incorrect product info.