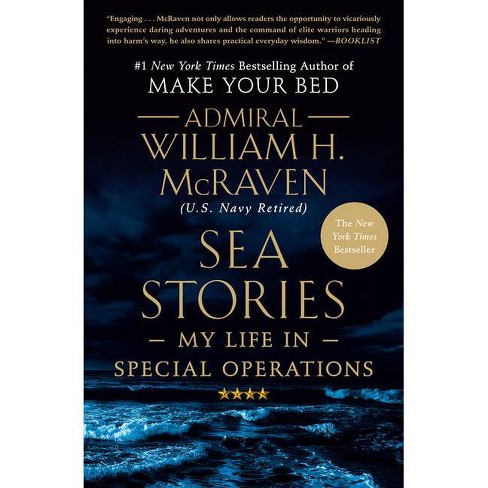 In this instant New York Times bestseller, the celebrated author of Make Your Bed shares amazing adventure stories from his career as a Navy SEAL and commander of America's Special Operations Forces.
Admiral William H. McRaven is a part of American military history, having been involved in some of the most famous missions in recent memory, including the capture of Saddam Hussein, the rescue of Captain Richard Phillips, and the raid to kill Osama bin Laden.
Sea Stories begins in 1960 at the American Officers' Club in France, where Allied officers and their wives gathered to have drinks and tell stories about their adventures during World War II -- the place where a young Bill McRaven learned the value of a good story. Sea Stories is an unforgettable look back on one man's incredible life, from childhood days sneaking into high-security military sites to a day job of hunting terrorists and rescuing hostages.
Action-packed, inspiring, and full of thrilling stories from life in the special operations world, Sea Stories is a remarkable memoir from one of America's most accomplished leaders.

PRAISE FOR MAKE YOUR BED
"Should be read by every leader in America... [MAKE YOUR BED] is a book to inspire your children and grandchildren to become everything that they can. It is a book to discuss with your executive leadership team as a spur to meeting shared goals. Most of all, it is a book that will leave you with tears in your eyes."
--Wall Street Journal

"Sea Stories, a well-written book that reads like a thriller, covers some of the most important historical actions taken by Navy SEALs and other special operators."--The Washington Times

"Engaging...Sea Stories is more than an autobiography, more than a narrative of recent military history, and more than the sum of one remarkable man's experiences. In his excellently flowing prose...McRaven not only allows readers the opportunity to vicariously experience daring adventures and the command of elite warriors heading into harm's way, he also shares practical everyday wisdom."--Booklist (Starred Review)

"Full of captivating personal anecdotes from inside the national security vault...McRaven's lessons, like his commencement speech, extend far beyond his bed-making. He devotes the 10-chapter book to lessons about moving beyond failure, standing up to bullies and giving others hope."--Washington Post

"McRaven...has taken the genesis of what he learned during SEAL training and his nearly four decades in Navy Special Operations into a thin, powerful book."--USA Today

"Readers interested in the essential work of military special forces will be inspired by McRaven's adventures."--Kirkus

Admiral William H. McRaven (U.S. Navy Retired) is the #1 New York Times bestselling author of Make Your Bed and the New York Times bestseller Sea Stories: My Life in Special Operations. In his thirty-seven years as a Navy SEAL, he commanded at every level. As a Four-Star Admiral, his final assignment was as Commander of all U.S. Special Operations Forces. After retiring from the Navy, he served as the Chancellor of the University of Texas System from 2015 to 2018. He now lives in Austin, Texas with his wife, Georgeann.
If the item details above aren’t accurate or complete, we want to know about it. Report incorrect product info.