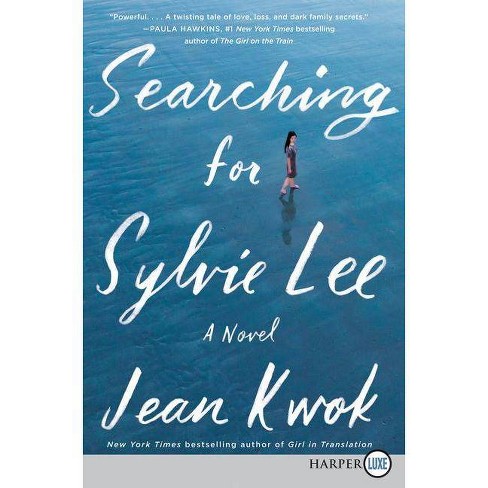 Sylvie, the beautiful, brilliant, successful older daughter of the Lee family, vanishes. Terrified yet determined, Amy, the sheltered baby of the family, retraces her movements, but instead of simple answers, she discovers something much more valuable: the truth.

This is the large print edition.

"Powerful . . . A twisting tale of love, loss, and dark family secrets." -- Paula Hawkins, #1 New York Times bestselling author of The Girl on the Train and Into the Water

A poignant and suspenseful drama that untangles the complicated ties binding three women--two sisters and their mother--in one Chinese immigrant family and explores what happens when the eldest daughter disappears, and a series of family secrets emerge, from the New York Times bestselling author of Girl in Translation

It begins with a mystery. Sylvie, the beautiful, brilliant, successful older daughter of the Lee family, flies to the Netherlands for one final visit with her dying grandmother--and then vanishes.

Amy, the sheltered baby of the Lee family, is too young to remember a time when her parents were newly immigrated and too poor to keep Sylvie. Seven years older, Sylvie was raised by a distant relative in a faraway, foreign place, and didn't rejoin her family in America until age nine. Timid and shy, Amy has always looked up to her sister, the fierce and fearless protector who showered her with unconditional love.

But what happened to Sylvie? Amy and her parents are distraught and desperate for answers. Sylvie has always looked out for them. Now, it's Amy's turn to help. Terrified yet determined, Amy retraces her sister's movements, flying to the last place Sylvie was seen. But instead of simple answers, she discovers something much more valuable: the truth. Sylvie, the golden girl, kept painful secrets . . . secrets that will reveal more about Amy's complicated family--and herself--than she ever could have imagined.

A deeply moving story of family, secrets, identity, and longing, Searching for Sylvie Lee is both a gripping page-turner and a sensitive portrait of an immigrant family. It is a profound exploration of the many ways culture and language can divide us and the impossibility of ever truly knowing someone--especially those we love.

It begins with a mystery. Sylvie, the beautiful, brilliant, successful older daughter of the Lee family, flies to the Netherlands to visit her dying grandmother--and then vanishes.

Amy Lee is too young to remember a time when her parents were newly immigrated and too poor to keep her sister. Seven years older, Sylvie was raised by a foreign relative and didn't rejoin her family in America until she was nine. Amy has always looked up to her fierce and loving sister. But what happened to Sylvie? When Amy retraces her sister's movements, instead of simple answers, she discovers something much more valuable: the truth. Sylvie, the golden girl, kept painful secrets . . . secrets that will reveal more about Amy's complicated family--and herself--than she ever could have imagined.

A deeply moving story of family, secrets, and identity, Searching for Sylvie Lee is a profound exploration of the many ways culture can divide us and the impossibility of ever truly knowing someone--especially those we love.

"[Kwok's] sharp and surprising language transports readers across the globe on a breathless and emotionally complex journey. Excellent from every angle, this is a can't-miss novel for lovers of poignant and propulsive fiction." --Booklist (starred review)

"Kwok tells this story of an immigrant family with lucidity and compassion... a profoundly moving portrayal of the complicated identities that exist even within a single family... a graceful portrait of the sacrifices we make for love."--Nylon Magazine, "50 Books You'll Want To Read In 2019"

"Searching for Sylvie Lee is so much more than a globe-trotting suspense novel--it's a moving portrait of the unintended consequences that stem from an immigrant family's efforts to adapt, survive, and provide their children with a better future."--Harper's Bazaar

"More than a simple suspense tale of a missing young woman, this novel explores the complicated dynamics of immigrant families and the universal quest for belonging and identity."--Town & Country

"This compelling mystery will scoop you up from page one and won't let go until the very end.... Come for the mystery surrounding Sylvie's disappearance, and stay for Kwok's empathetic and masterful exploration of the painful choices one family makes to survive."--Daily Beast

"Searching for Sylvie Lee is riveting. A dazzling, talented woman disappears, leading her younger sister to search the Netherlands--and the past--for the truth. This novel is part mystery, part saga of an immigrant family. It is both gripping and emotionally resonant on every page--a remarkable achievement."--Scott Turow, New York Times bestselling author of Testimony

"A satisfying hybrid of mystery and family drama."--People

"Like all most compelling mysteries, Jean Kwok's Searching for Sylvie Lee has a powerful emotional drama at its heart. A twisting tale of love, loss and dark family secrets."--Paula Hawkins, #1 New York Times bestselling author of The Girl on the Train and Into the Water

"A dazzling display of the unique bonds among women, mothers and daughters. It's a suspenseful read detailing what happens when the oldest daughter in a Chinese immigrant family disappears."--CNN.com

"Searching for Sylvie Lee by Jean Kwok is a mystery about a daughter's disappearance that will have you on the edge of your beach chair."--theSkimm

"Searching for Sylvie Lee is part mystery, part emotional drama, and the book you need in your beach bag this summer."--Popsugar

"A favorite of Paula Hawkins, this literary novel will take you on a rollercoaster of emotions this summer. A must-read for fans of Celeste Ng."--She Reads

"Her book explores the mirage of the American Dream. Sylvie seems to have made it in every sense of the word, but Kwok's story asks: What is the price of realizing this dream? And who must pay it?"--New York Times

"I couldn't help but continue to read to figure out where she was and what happened to her. You can't put it down!"
--Jenna Bush Hager, Today Show Book Club Pick

"I was only about two-thirds of the way through Jean Kwok's Searching For Sylvie Lee when I began telling everyone I know: "I've found this book, you need to read it."... This is a story like no other."--Marie Claire

"Kwok isn't interested in playing out the conventions of the genre, instead opting for a narrative structure that focuses on the missing woman and the sister who searches for her, both of whom must face questions of identity and justice in a complicated, hybridized world that offers no easy answers."
--Thrillist

"A compelling story of how the unsaid can powerfully shape families and lives... Sharply observed, with a plot as unpredictable as its moody Dutch landscape, Kwok's novel is a powerful meditation on loss, identity and belonging."--Shelf Awareness (starred review)

"A moving tale that, while billed as a mystery, transcends the genre..... This is a beautifully written story in which the author evokes the hard reality of being an immigrant and a woman in today's world."--Washington Post

"This powerful novel is a must-read."--Women.com

"A wonderful portrait of an immigrant family and one of the best 'unputdownable' suspense novels I've read in a long time."--Herman Koch, New York Times bestselling author of The Dinner

"Crossing continents and generations, this magnificent and enthralling story unfolds with the intricate suspense of a classic mystery novel and blooms into a radiant tale of inter-generational family love."--Lan Samantha Chang, award-winning author of Inheritance

"Dazzling. A heartbreaking, tumultuous ride of a novel that upends our expectations--about family loyalty, cultural identity and the very nature of love itself--at every twist and turn. Kwok is a wise and knowing story-teller who keeps us under her spell until the very last page."--Julie Otsuka, New York Times bestselling author of The Buddha in the Attic

"Deftly moving between generations and from New York to the Netherlands, Searching for Sylvie Lee is a page-turner, and a suspenseful journey of secrets, family, loyalty, and loss."--Lisa Ko, award-winning author of The Leavers

"Masterfully written, this suspenseful story of two sisters, and the power of long-buried secrets, is also a profound exploration of one immigrant family's search for identity and belonging in an increasingly global world. Searching for Sylvie Lee will haunt me for a long time."--Sari Wilson, acclaimed author of Girl Through Glass

"This isn't a novel--it's a puzzle box of familial secrets, some dark, others luminous, all of it haunting, mysterious, and completely satisfying. I was utterly spellbound."--Jamie Ford, New York Times bestselling author of Hotel on the Corner of Bitter and Sweet

"With prose as mesmerizing and full of depth as a perfect pearl, Kwok's new literary masterwork explores the Chinese immigrant experience both in New York and in Holland, but what it's really getting at is what it means for anyone to belong--to both your community, your family, and to yourself."--Caroline Leavitt, New York Times bestselling author of Cruel Beautiful World