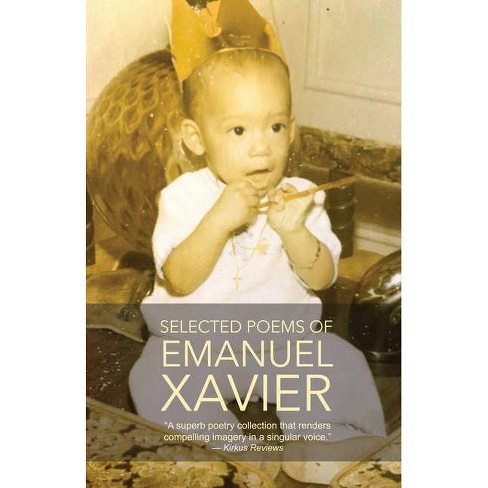 For the first time ever, a selected poetry collection from Emanuel Xavier, renowned LGBTQ poet and one of the Latinx community's treasures.

When he first emerged as a Nuyorican Poets Café slam poet in the 1990s, Emanuel Xavier quickly took his place as one of the first openly queer, celebrated, controversial and significant poets of the era. Now, decades later, as a former homeless teen and a hate crime survivor, Xavier still stands as one of America's most inspiring and powerful voices.

"Gay Nuyorican life is limned and exalted in these scintillating poems. Xavier, a fixture at Nuyorican Poets Cafe slams in Manhattan and a star of HBO's Russell Simmons Presents Def Poetry, gathers 28 poems that infuse searing social and political commentary into achingly personal reflections. Many paint a panorama of New York that is bustling and vibrant: 'Ricans and Dominicans drive around / with black-faced virgins and saints on their dashboards / blasting rap and freestyle / down the streets.' The poet's collection conveys his struggle as a gay man in an often homophobic culture in tones that range from the bruised confessional in 'Deliverance' ('Wiping / myself / staring at the blood / shit / scum / from the last trick / that once again / left me bruised / deep inside') to the prophetic voice of 'If Jesus Were Gay.' ('If the crown of thorns were placed on his head / to mock him as the / 'Queen of the Jews' / If he was whipped because fags are considered / sadomasochistic sodomites, / If he was crucified for the brotherhood of man / would you still repent?') There's a lot of pain from separation and repudiation in Xavier's verse-from his biological father's abandonment of the family, his mother's rejection of his gay sexuality, and America's disdain for Latino immigrants. The volume is thus full of poetic portraits of outsiders and castoffs that can take strange and hallucinatory forms, as in 'Bushwick Bohemia, ' where a slacker is 'lying shirtless on the couch blunted out of his mind / staring at the roach on the ceiling / one single roach in a vast desert / or maybe an alien exploring a new world'-a grungy, Kafkaesque yet somehow hopeful and even liberating tableau of arrival and persistence. And the poet's life generates bleak, bracing wisdom in 'Beside Myself': 'You are not going to be remembered. / The best thing you ever did was keep a cat / alive for over sixteen years. / All you have is that rent-stabilized apartment / with the cracked paint and broken windows.' Xavier's many fans (and newbies as well) will be entranced by his evocative language, subtle rhythms, and fearless gaze." -Kirkus Reviews (starred review)

"It feels shallow to say these poems are beautiful, as if that's the best art could aspire to, so I'll say that and add by beautiful I mean, if you can be taken through this life, and pull this from your heart to offer us, this trip through a life and a city and the people here, then yes, this book is beautiful, majestic, a triumph for the way poetry can take the small story of a person, and the enormous one, of a country, or two or three, and make these songs that explain each to the other. The result is a powerful testament to Xavier's poetic talents and his legacy." - Alexander Chee, fiction writer, poet & journalist

"If the Bible were to be rewritten in contemporary times from the viewpoint of a queer Latinx poet/former pier queen who came of age in the Ball scene, then Emanuel Xavier would be one of its scribes. In Xavier's own words, 'There are gods amongst us in these ghettos so black, so fierce, so brown, so beautiful.' This collection is a necessary one that gives voice to, not only Xavier's journey of becoming a poet and survivor, but also gives voice to the forgotten, discarded and invisible." - Pamela Sneed, poet & activist

"A provocative voice of the Latinx liminal space, Xavier takes turns seducing and alerting the reader with a fearless sensuality and a knowing lack of regret. A much-needed, streetwise collection living at the intersection of raw desire and a deep compassion for a marginalized people." - Ed Morales, journalist, filmmaker, & poet

"From the heartbreak of childhood abuse to the beauty of unconditional love for a life-saving rainbow community and Nuyorican underclass so vividly portrayed in poetic street scenes, Emanuel Xavier takes us on his life's journey spanning years of award-winning poetry. Laying bare truths of oppressive conventions that, if left unchallenged, would lay waste to creativity and the remarkable diversity of life, Selected Poems of Emanuel Xavier is all raw metaphors, aesthetic beauty, history, passion, and so much more. Emanuel Xavier is one of the seminal poets of the Nuyorican Literary Movement." - Nancy Mercado, poet & activist

"Emanuel Xavier is a blasphemer, and a guerilla poet, whose verses can hurt like bullets. His Selected Poems can be read as the autobiography of an Ecuadorian/Puerto Rican poet who desperately fights to break from 'the mentiras' his parents fed him as he grew up in el barrio, which he acknowledges as his true country. But el barrio can be a cruel world, and Xavier's subjects are queer people, the transgendered, the powerless and invisible outcasts the American Dream discards as unrecyclable trash.

Echoes of Allen Ginsberg's 'Howl'-in their audacity, their urgency-can be heard in Xavier's early poetry; but, by the time he arrives at the final poems in this collection, Emanuel Xavier's anger, and outrage, have been surprisingly replaced by a poignant wisdom. The journey he has so vividly evoked is that of a hero." - Jaime Manrique, novelist & poet

"For decades, Emanuel Xavier has been our poet of the streets, of the balls, of the pier, through our loves, lives lost, and in the growth and ruin of our city. Finally a new generation has a chance to breathe through his collected poems, a monument to our past, our collectivity and our hearts." - Sarah Schulman, author & activist

"Thank goodness we at last get the Selected Poems of Emanuel Xavier! This collection pulses with the necessary urgency we've come to expect from this luminary poet. While reading you can feel the clarity of his voice speaking up to you from the page with its razor-blade precision offering insight and humor navigating the multifaceted truths of this world." - Sam Sax, poet