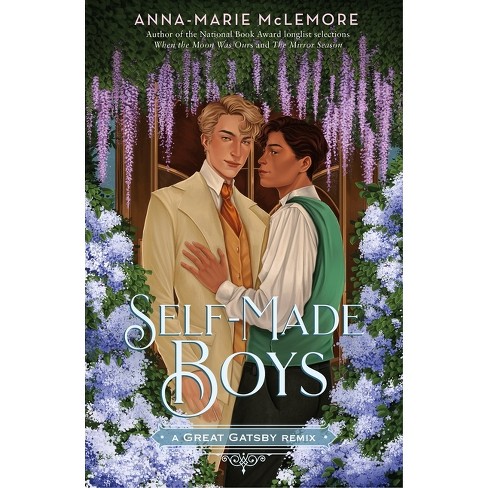 Three teens chase their own versions of the American Dream during the Roaring 20s in this YA reimagining of The Great Gatsby.

New York City, 1922. Nicolás Caraveo, a 17-year-old transgender boy from Wisconsin, has no interest in the city's glamor. Going to New York is all about establishing himself as a young professional, which could set up his future--and his life as a man--and benefit his family. Nick rents a small house in West Egg from his 18-year-old cousin, Daisy Fabrega, who lives in fashionable East Egg near her wealthy fiancé, Tom--and Nick is shocked to find that his cousin now goes by Daisy Fay, has erased all signs of her Latine heritage, and now passes seamlessly as white. Nick's neighbor in West Egg is a mysterious young man named Jay Gatsby, whose castle-like mansion is the stage for parties so extravagant that they both dazzle and terrify Nick. At one of these parties, Nick learns that the spectacle is all meant to impress a girl from Jay's past--Daisy. And he learns something else: Jay is also transgender. As Nick is pulled deeper into the glittery culture of decadence, he spends more time with Jay, aiming to help his new friend reconnect with his lost love. But Nick's feelings grow more complicated when he finds himself falling hard for Jay's openness, idealism, and unfounded faith in the American Dream. Praise for Self-Made Boys:

Tenderly written and achingly romantic, Anna-Marie McLemore has crafted a romance for the ages. Their Latinx lens provides more nuance and depth to the classic story. With a breath of fresh life, Self-Made Boys shows us how queer love has flourished in quiet corners across history. --Aiden Thomas, New York Times-bestselling author of Cemetery Boys

Tenderly written and achingly romantic, Anna-Marie McLemore has crafted a romance for the ages. Their Latinx lens provides more nuance and depth to the classic story. With a breath of fresh life, Self-Made Boys shows us how queer love has flourished in quiet corners across history. --Aiden Thomas, New York Times-bestselling author of Cemetery Boys

A masterpiece intertwining painful teen realities involving injustices based on race, ethnicity, class, and gender with trauma and healing within loving, supportive families. --School Library Journal, starred review An empowering story of two survivors healing together... Their vulnerable, spellbinding story, colored with magic realism and achingly beautiful prose, is about healing after trauma, reclaiming your body and choices, and the empathetic understanding between survivors. --Booklist, starred review McLemore whips up a magical realist tale as spellbinding as the pan dulce creations described within this novel's pages ... With haunting prose and sharp insight, McLemore expertly combines the piquant with the sweet. --Publishers Weekly, starred review The poetic and vulnerable prose illuminates the need for more open conversation about sexuality, consent, and abuse without the limits of the gender binary ... Piercing magic. --Kirkus Reviews, starred review An unforgettable story of trauma and healing, told in achingly beautiful prose with great tenderness and care. --Karen M. McManus, #1 New York Times-bestselling author of One of Us Is Lying A powerful, harrowing, and important story about trauma, identity, taking back power and the redemptive nature of healing. These characters will stay with me forever. An absolute must read. --Aisha Saeed, New York Times-bestselling author of Amal Unbound and Yes No Maybe So Praise for Dark and Deepest Red:

McLemore weaves another magic spell ... This novel will leave an indelible mark on readers' hearts. --Kirkus Reviews, starred review McLemore fashions another gorgeous novel ... McLemore's well-choreographed story will dance on in readers' minds. --Booklist, starred review "One of the most beautiful books I've read in years. McLemore is a master. --Susan Dennard, New York Times-bestselling author of the Witchlands series Any fan of McLemore's body of work, Bone Gap by Laura Ruby, or Malinda Lo's fantasy will revel in this novel. A magical and lovely first purchase for all YA shelves. --School Library Journal, starred review McLemore is at their finest ... They write open-heartedly about families found and families given, the weight of expectation and the price of duty, and in the end offers up something that's vibrant, wondrously strange, and filled to the brim with love of all kinds. --Booklist, starred review McLemore weaves in powerful themes of identity, family, and first love, but there are also much-needed messages about overcoming hurtful stereotypes and expectations. McLemore's poignant retelling is a must-read for fans of fantasy and fairy tales. --Kirkus Reviews, starred review Praise for Wild Beauty: No one does magical realism quite like McLemore ... Sheer magic: fierce, bright, and blazing with possibility. --Booklist, starred review McLemore weaves an intricate tale of family, love, loss, and flowers. --School Library Journal, starred review Praise for When the Moon Was Ours: A National Book Award in Young People's Literature Longlist Selection
A 2017 Stonewall Honor Book
A James Tiptree Jr. Award Winner

"McLemore's second novel is such a lush surprising fable, you half expect birds to fly out of the pages ... McLemore uses the supernatural to remind us that the body's need to speak its truth is primal and profound." --Jeff Giles, New York Times Book Review Lushly written and surprisingly suspenseful, this magical tale is not just a love story, but a story of the secrets we keep and the lies we tell, and the courage it takes to reveal our authentic selves to each other and to the world. --Laura Ruby, Printz Award-winning author of Bone Gap McLemore mesmerizes once again with a lush narrative set at the thresholds of identity, family, and devotion ... Readers will be ensnared in this ethereal narrative long before they even realize the net has been cast. --Kirkus Reviews, starred review With luminous prose infused with Latino folklore and magical realism, this mixes fairy-tale ingredients with the elegance of a love story, with all of it rooted in a deeply real sense of humanity. Lovely, necessary, and true. --Booklist, starred review Praise for The Weight of Feathers: A 2016 William C. Morris Debut Award Finalist

Scales and feathers touch and burn in McLemore's stunning debut. The beauty of the language wraps around you, not letting go until long after the final page. --Jaleigh Johnson, New York Times-bestselling author of The Mark of the Dragonfly and Secrets of Solace Ethereal and beguiling ... The enchanting setup and the forbidden romance that blooms between these two outcasts will quickly draw readers in, along with the steady unspooling of the families' history and mutual suspicions in this promising first novel. --Publishers Weekly Readers beguiled by the languorous language...will find themselves falling under its spell ... A contemporary, magical take on an ever compelling theme. --Kirkus Reviews

Anna-Marie McLemore was born in the foothills of the San Gabriel Mountains and taught by their family to hear la llorona in the Santa Ana winds. They are the author of The Weight of Feathers, a finalist for the 2016 William C. Morris Debut Award; 2017 Stonewall Honor Book When the Moon Was Ours, which was longlisted for the National Book Award in Young People's Literature and was the winner of the James Tiptree Jr. Award; Wild Beauty; Blanca & Roja; Dark and Deepest Red; The Mirror Season, which was also longlisted for the National Book Award in Young People's Literature; Lakelore; and Self-Made Boys: A Great Gatsby Remix.
If the item details above aren’t accurate or complete, we want to know about it. Report incorrect product info.