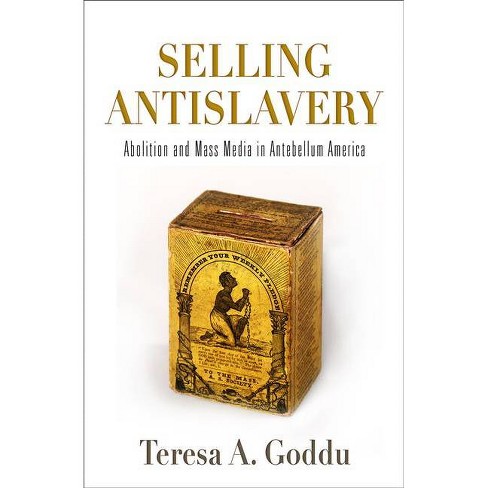 A richly illustrated history of the American Anti-Slavery Society and its print, material, and visual artifacts

Beginning with its establishment in the early 1830s, the American Anti-Slavery Society (AASS) recognized the need to reach and consolidate a diverse and increasingly segmented audience. To do so, it produced a wide array of print, material, and visual media: almanacs and slave narratives, pincushions and gift books, broadsides and panoramas. Building on the distinctive practices of British antislavery and evangelical reform movements, the AASS utilized innovative business strategies to market its productions and developed a centralized distribution system to circulate them widely. In Selling Antislavery, Teresa A. Goddu shows how the AASS operated at the forefront of a new culture industry and, by framing its media as cultural commodities, made antislavery sentiments an integral part of an emerging middle-class identity. She contends that, although the AASS's dominance waned after 1840 as the organization splintered, it nevertheless created one of the first national mass markets.

Goddu maps this extensive media culture, focusing in particular on the material produced by AASS in the decade of the 1830s. She considers how the dissemination of its texts, objects, and tactics was facilitated by the quasi-corporate and centralized character of the organization during this period and demonstrates how its institutional presence remained important to the progress of the larger movement. Exploring antislavery's vast archive and explicating its messages, she emphasizes both the discursive and material aspects of antislavery's appeal, providing a richly textured history of the movement through its artifacts and the modes of circulation it put into place.

Featuring more than seventy-five illustrations, Selling Antislavery offers a thorough case study of the role of reform movements in the rise of mass media and argues for abolition's central importance to the shaping of antebellum middle-class culture.