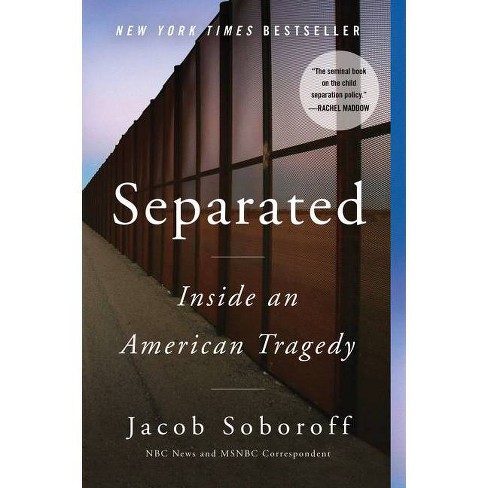 new at target¬
Help us improve this page

The seminal book on the child-separation policy. --Rachel Maddow

Now in paperback, featuring updated reporting and a new afterword: The award-winning NBC News correspondent lays bare the full truth behind America's systematic separation of families at the US-Mexico border.

In June 2018, Donald Trump's most notorious decision as president had secretly been in effect for months before most Americans became aware of the astonishing inhumanity being perpetrated by their own government. Jacob Soboroff was among the first journalists to expose this reality after seeing firsthand the living conditions of the children in custody. His influential series of reports ignited public scrutiny that contributed to the president reversing his own policy and earned Soboroff the Cronkite Award for Excellence in Political Broadcast Journalism and, with his colleagues, the 2019 Hillman Prize for Broadcast Journalism.

But beyond the headlines, the complete, multilayered story lay untold. How, exactly, had such a humanitarian tragedy--now deemed "torture" by physicians--happened on American soil? Most important, what has been the human experience of those separated children and parents?

Soboroff has spent the past two years reporting the many strands of this complex narrative, developing sources from within the Trump administration who share critical details for the first time. He also traces the dramatic odyssey of one separated family from Guatemala, where their lives were threatened by narcos, to seek asylum at the U.S. border, where they were separated--the son ending up in Texas, and the father thousands of miles away, in the Mojave desert of central California. And he joins the heroes who emerged to challenge the policy, and who worked on the ground to reunite parents with children.

In this essential reckoning, Soboroff weaves together these key voices with his own experience covering this national issue--at the border in Texas, California, and Arizona; with administration officials in Washington, D.C., and inside the disturbing detention facilities. Separated lays out compassionately, yet in the starkest of terms, its human toll, and makes clear what is at stake as America struggles to reset its immigration policies post-Trump.

"Groundbreaking. ... All the original reporting in this book is extraordinary." --Andrea Mitchell

To experience the pain and anger many suburban voters felt about Trump's policy of ripping children from the arms of their asylum-seeking parents along the southern border, I'd recommend Separated: Inside an American Tragedy by Jacob Soboroff.--Eugene Robinson, Washington Post

Jacob Soboroff zooms in on President Trump and his administration's decision to separate children from their parents as a deterrent to border crossers. In doing so, he illuminates how, in the face of congressional inaction, a cadre of presidential advisers can introduce policies with shocking, unintended consequences.--Laura Wides-Muñoz, Washington Post

As a correspondent for NBC News, Soboroff was among the the first to report on the Trump administration's family separation policy; here, he digs deeper into its roots and consequences.--New York Times Book Review, New & Notable

Fantastic. ... Serves as a blueprint, honestly, for everything that we are seeing now in the pandemic, everything wrong with this administration, it's all right there in black and white. ... The book is fantastic, the reporting is fantastic. --Chris Hayes

Jacob Soboroff's excellent reporting at the border helped shine a light on Trump's cruel family separation policy. His new book, Separated, is a sobering account of what he saw and the human toll of the Trump agenda.--Julián Castro

The seminal book on the child-separation policy.--Rachel Maddow, The Rachel Maddow Show
If the item details above aren’t accurate or complete, we want to know about it. Report incorrect product info.

Get it by Tue, Jun 29 with Express Shipping
Get it by from Wed, Jun 30 - Tue, Jul 6 with free Standard Shipping