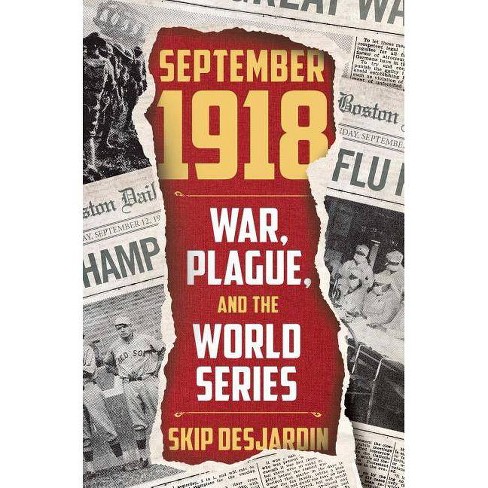 $29.99
0 out of 5 stars with 0 reviews
be the first!be the first! ratings
Shipping
Free standard shipping with RedCard
Help us improve this page

One hundred years ago, in September 1918, three things came to Boston: war, plague, and the World Series. This is the unimaginable story of that late summer month, in which a division of Massachusetts militia volunteers led the first unified American fighting force into battle in France, turning the tide of World War I. Meanwhile the world's deadliest pandemic--the Spanish Flu--erupted in Boston and its suburbs, bringing death on a terrifying scale first to military facilities and then to the civilian population. At precisely the same time, in a baseball season cut short on the homefront and amidst the surrounding ravages of death, a young pitcher named Babe Ruth rallied the sport's most dominant team, the Boston Red Sox, to a World Series victory--the last World Series victory the Sox would see for 86 years. In September 1918: War, Plague and the World Series, the riveting, intertwined stories of this remarkable month introduce readers to a richly diverse cast of characters: David Putnam, a Boston teenager and America's World War I Flying Ace; a transcendent Babe Ruth and his teammates, battling greedy owners and a hostile public; entire families from all social strata, devastated by sudden and horrifying influenza death; unknown political functionary Calvin Coolidge, thrust into managing the country's first great public health crisis by an absentee governor; and New England's soldiers, enduring trench warfare and poisonous gas to drive back German forces. At the same time, other stories were also unfolding: Cambridge high school football star Charlie Crowley, a college freshman teamed up with stars Curly Lambeau and George Gipp under a first-time coach named Knute Rockne; Boston suffrage leader Maud Wood Park was fighting for women's right to vote, even as they flexed their developing political muscle; poet E.E. Cummings, an Army private found himself stationed at the center of a biological storm; and Massachusetts Senator Henry Cabot Lodge maneuvered as the constant rival of a sitting wartime president. In the tradition of Erick Larsen's bestselling Devil in the White City, September 1918 is a haunting three-dimensional recreation of a moment in history almost too cinematic to be real.
If the item details above aren’t accurate or complete, we want to know about it. Report incorrect product info.