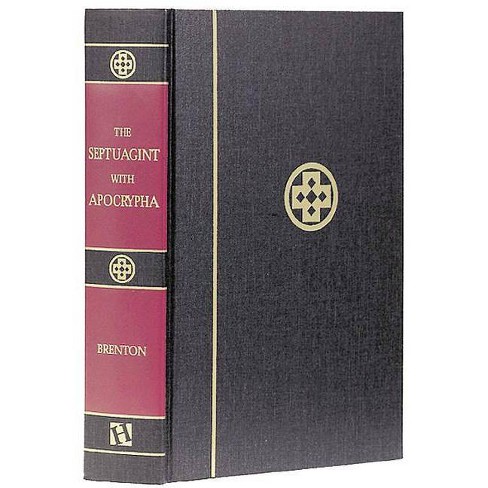 $30.49
0 out of 5 stars with 0 reviews
be the first!be the first! ratings
Shipping
Not available
Help us improve this page

This edition of "The Septuagint with Apocrypha" (the ancient Greek translation of the Hebrew Old Testament and the apocryphal books of the same linguistic origin) gives the complete Greek text along with a parallel English translation by Brenton.

From the Preface
This edition of the Septuagint, including Apocrypha, giving the complete Greek text along with a parallel English translation by Sir Lancelot Charles Lee Brenton (1807-1862), was first published in London in 1851.

The Septuagint (from the Latin septuaginta, meaning "seventy," and frequently referred to by the roman numerals LXX) is the Greek translation of the Old Testament. The name derives from the tradition that it was made by seventy (or seventy-two) Jewish scholars at Alexandria, Egypt during the reign of Ptolemy Philadelphus (285-247 B.C.). It has been preserved in a large number of manuscript copies of the original, and the Greek text in Brenton's edition is based on Vaticanus, an early fourth-century manuscript, with some reliance on other texts, particularly Alexandrinus, a fifth-century manuscript.

Although it is not completely understood either when or why the translation was originally done, it is clear that it in large measure reflects the common language of the period and became the "Bible" of Greek-speaking Jews and then later of the Christians. It is worth noting that the Septuagint differs from the Hebrew Old Testament in certain ways: 1) the Greek text varies at many points from the corresponding Hebrew text; 2) the order of the Biblical Books is not the same--the threefold division of the Hebrew canon into the Law, Prophets, and Writings is not followed in the LXX; and 3) several books not found in the Hebrew are included in the LXX-- these books are known as the Apocrypha in the English Bible.

While the majority of the Old Testament quotations rendered by the New Testament authors are borrowed directly from the Septuagint, a number of times they provide their own translation which follows the Hebrew text against the Septuagint. In general, the vocabulary and style of the Septuagint is reflected in the theological terms and phraseology chosen by the New Testament writers, and therefore, takes on particular significance for a better overall understanding of the Scriptures. It is not surprising--due to its early widespread use and enduring influence in the Church--that the order of the Biblical Books in the Septuagint, rather than that of the Hebrew O.T., became the accepted order.

Although rejected by Protestants as non-canonical, the Apocryphal writings have enduring value as a literary and historical record of the intertestamental period. They often provide important background and illustrative material for a better understanding of the New Testament "world" and thus the New Testament itself.