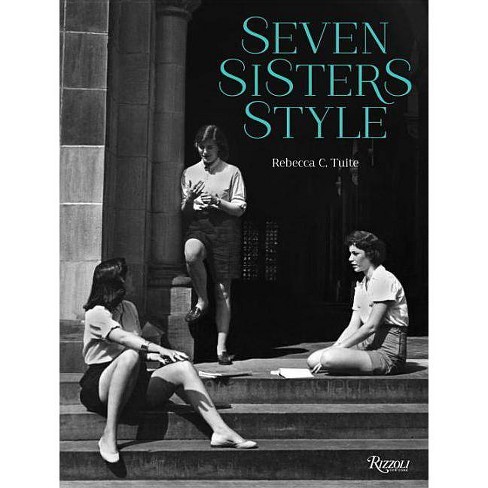 "Hold all my calls. I'll be reading Seven Sisters Style: The All-American Preppy Look for the rest of the day...I'm quite certain it will be a classic style title for years to come. The author is a Vassar grad and fashion historian and we have been corresponding for years now on the subject of tomboys, American style, preppy culture, books, and countless other items. I can't say enough great things about Ms. Tuite who came to this project in such an honest and passionate way. The final result of her research is a thorough definition and celebration of a truly iconic American style, from saddle shoes to Shetland sweaters to the inherent spirit of the Seven Sister student. Each page is a journey through time." -Tomboy Style Blog "Billed as a response to Take Ivy -- the 1965 Japanese photo book documenting the preppy style of male Ivy Leaguers -- Seven Sisters Style celebrates the style evolution of the American college girl, from calico and cardigans to Bermuda shorts and, eventually, jeans. Icons include Katharine Hepburn (Bryn Mawr class of 1928), Jackie Kennedy (who attended Vassar for two years before transferring to George Washington University), and Meryl Streep (Vassar class of 1971)." -New York Magazine

..".a beautifully illustrated, intensively researched celebration of the all-American preppy style pioneered by the women of the Seven Sisters Colleges. The Seven Sisters' style changed how all women dressed and it became known the world over as inherently American. A lot of ink has been spilled in the past few years celebrating male Ivy style -- Seven Sisters Style is, finally, the companion piece we've been waiting for." -Refinery29

"Even those of us who didn't attend Vassar, Wellesley or Smith will fall for Seven Sisters Style: The All-American Preppy Look. After all, it's these Ivey League colleges that spawned the now-classic American sportswear look and introduced such wardrobe staples as the blazer, bermuda shorts, cashmere and kitten heels." -Boston Proper/Style Edit "Seven Sisters Style corrects a massive oversight by finally giving these seven colleges their own Take Ivy." -Flavorwire ..".Rebecca Tuite, examines the campus attire that evolved at these schools from the late 1800's and throughout the 20th century, bringing their style influences full circle to the present day. Through archival photographs, the author demonstrates how these college women became unintentional fashion trendsetters who laid the foundations of the American Preppy style." -LookOnline.com "Tuite is the author of the sensational book, Seven Sisters Style: The All-American Preppy Look, a nostalgic look at the birth of prep on the prestigious female-only campuses of Barnard, Bryn Mawr, Mount Holyoke, Radcliffe, Smith, Vassar and Wellesley, where style icons such as Katharine Hepburn, Jacqueline Kennedy and Meryl Streep spent their college days. Herewith, Tuite explains the ABCs of spring semester fashion as seen at the Seven Sisters." -Dujour.com "Seven Sisters Style celebrates the all-American preppy style pioneered by the women of the Seven Sisters Colleges, and its twentieth-century evolution, from its on-campus foundations and creation of a collegiate "uniform," to its enduring legacy which can be summarized with the phrase "From Barnard to Bergdorf." Seven Sisters Style celebrates a timeless and internationally ubiquitous look--seen on and off the runway, in Hollywood, and in popular culture--that continues to be a source of fascination and inspiration, forever remaining in style." -Fashion Windows.net "Fashion Titles You Need to Read This Spring: This is a fantastic photo and essay collection on the underappreciated role of women's college campuses in establishing the codes of preppy fashion." -InStyle.com
If the item details above aren’t accurate or complete, we want to know about it. Report incorrect product info.