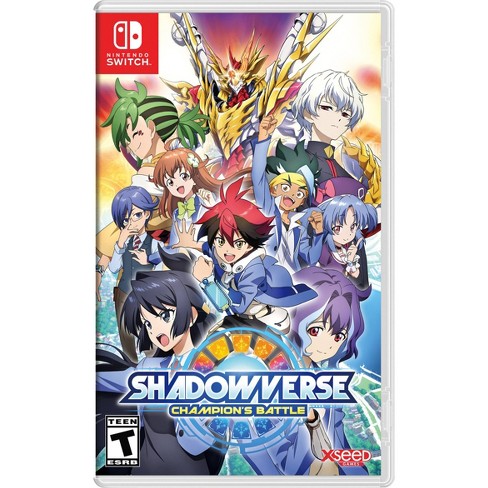 Late to your first class as the newest transfer student at Tensei Academy, you run into Hiro Ryugasaki, self-professed super fan of the popular card battle game Shadowverse. He introduces you to his friends and they eagerly show you how to play the game.

But when you decide to join the school's Shadowverse Club, it turns out that it is in danger of disbanding due to lack of members, and the student council president proclaims that the only way to save it is to increase club membership and become champions of the national Shadowverse tournament. Not quite ready to throw in the towel just yet, you and Hiro decide to team up with Rei, the president (and one and only member) of the Shadowverse Club, and restore the club to its former glory.

Explore all the unique locations in and around your new school, where events and encounters await where you least expect them! Team up with your friends to help your classmates, enter in various tournaments, and aim to become national champion, all while working to save the Shadowverse Club.


The anime version of the hit strategic multiplayer mobile/PC card battle game Shadowverse is coming to the Nintendo Switch as an exciting new card battle RPG. Players will meet a fun cast of characters and duke it out in intense card battles. Experienced Shadowverse players will be able to seamlessly transition into the game as card battle rules are exactly the same as the original game they know and love, but new players will have no problem picking up and playing this beginner-friendly game as well! The game's card library boasts cards from the first three sets of the mobile/PC game, as well as brand new cards unique to this title, allowing players to create completely original strategies. Also new to the Switch version are special, deluxe battle animations!

KEY FEATURES
Enjoy intense battles in this one-on-one card game:
Players use three types of cards to build strategies and strive for victory. Become a master by skillfully playing cards, each with their own abilities, at the right time.

Create your ultimate deck:
Build your deck and engage in battle with strategies you build from the seven different classes, each with their own unique features, cards, and abilities. Collect over 600 cards as you progress through the story.

Battle with friends or take on players all over the world:
Enjoy ranked matches, free matches, and lobby matches, and even get new cards and exchange deck codes in online play. You can also battle your friends through local wireless play.