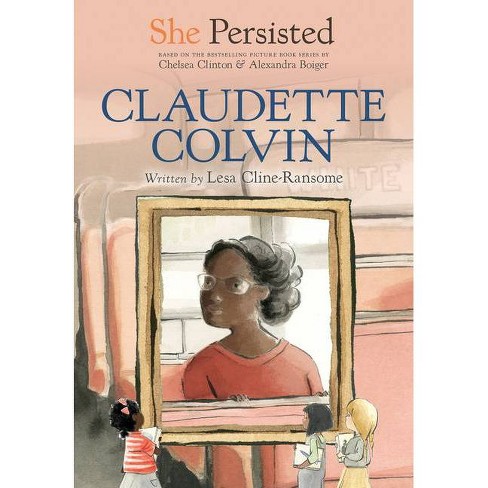 "Inspired by She persisted by Chelsea Clinton & Alexandra Boiger"--Title page.

Inspired by the #1 New York Times bestseller She Persisted by Chelsea Clinton and Alexandra Boiger comes a chapter book series about women who stood up, spoke up and rose up against the odds! In this chapter book biography by award-winning author Lesa Cline-Ransome, readers learn about the amazing life of Claudette Colvin--and how she persisted. Before Rosa Parks famously refused to give up her seat on a bus in Montgomery, Alabama, fifteen-year-old Claudette Colvin made the same choice. She insisted on standing up--or in her case, sitting down--for what was right, and in doing so, fought for equality, fairness, and justice. Complete with an introduction from Chelsea Clinton, black-and-white illustrations throughout, and a list of ways that readers can follow in Claudette Colvin's footsteps and make a difference! And don't miss out on the rest of the books in the She Persisted series, featuring so many more women who persisted, including Harriet Tubman, Ruby Bridges, Oprah Winfrey, and more! Praise for She Persisted: Claudette Colvin Cline-Ransome brings the teen activist to life with great compassion and impressive brevity . . . A noteworthy start for chapter-book readers wishing to read more about young leaders of the movement. --Kirkus Reviews Cline-Ransome's narrative provides a knowledgeable, interesting introduction to an ­important player in the civil rights movement. --School Library Journal

Praise for She Persisted: Claudette Colvin Cline-Ransome brings the teen activist to life with great compassion and impressive brevity . . . A noteworthy start for chapter-book readers wishing to read more about young leaders of the movement. --Kirkus Reviews A well-balanced and very readable account of Colvin's family life, her values, and her reasons for resisting unjust laws. . . . an engaging introduction to a young civil rights hero. --Booklist

Lesa Cline-Ransome (lesaclineransome.com) is the award-winning author of many critically acclaimed books for young readers, including Not Playing By the Rules: 21 Female Athletes Who Changed Sports, Young Pele: Soccer's First Star, Before She was Harriet, Overground Railroad, and Game Changers: The Story of Venus and Serena Williams. Her numerous honors include the Jane Addams Honor Award, the Christopher Award, Kirkus Best Book of the Year, SLJ Best Book of Year, and three NAACP Image Award nominations. Her debut middle grade novel, Finding Langston, received the Coretta Scott King Author Honor and the Scott O'Dell Award for Historical Fiction. The companion novel is Leaving Lymon. She is currently an SCBWI board member and host of KidLitTV's Past Present: Giving Past Stories New Life. She lives in the Hudson Valley region of New York with her family. You can follow Lesa on Twitter @lclineransome.

Chelsea Clinton is the author of the #1 New York Times bestseller She Persisted: 13 American Women Who Changed the World; She Persisted Around the World: 13 Women Who Changed History; She Persisted in Sports: American Olympians Who Changed the Game; Don't Let Them Disappear: 12 Endangered Species Across the Globe; It's Your World: Get Informed, Get Inspired & Get Going!; Start Now!: You Can Make a Difference; with Hillary Clinton, Grandma's Gardens and Gutsy Women; and, with Devi Sridhar, Governing Global Health: Who Runs the World and Why? She is also the Vice Chair of the Clinton Foundation, where she works on many initiatives, including those that help empower the next generation of leaders. She lives in New York City with her husband, Marc, their children and their dog, Soren. You can follow Chelsea Clinton on Twitter @ChelseaClinton or on Facebook at facebook.com/chelseaclinton. Gillian Flint (gillianflint.com) is an illustrator who has a passion for painting in watercolors. She has been drawing and creating characters for as long as she can remember. Her work has been published in the USA, the UK and Australia. In her spare time she enjoys reading and gardening at her home in the UK. You can follow her on Instagram @gillianflint_illustration. Alexandra Boiger (alexandraboiger.com) has illustrated nearly twenty picture books, including the She Persisted series by by Chelsea Clinton; the popular Tallulah series by Marilyn Singer; and the Max and Marla books, which she also wrote. Originally from Munich, Germany, she now lives outside of San Francisco, California, with her husband, Andrea; daughter, Vanessa; and two cats, Luiso and Winter. You can follow Alexandra on Instagram @alexandra_boiger.