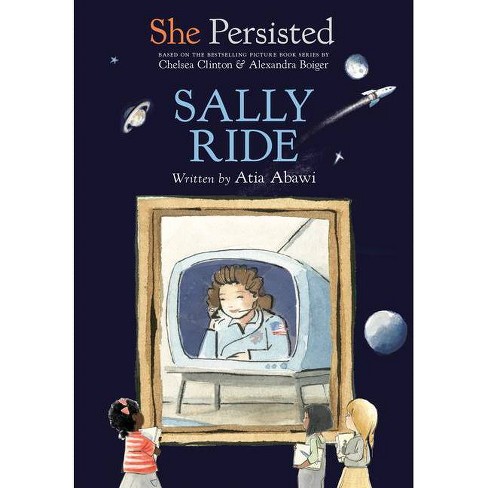 "A biography of Sally Ride in the She Persisted series"--

Inspired by the #1 New York Times bestseller She Persisted by Chelsea Clinton and Alexandra Boiger comes a chapter book series about women who stood up, spoke up and rose up against the odds! In this chapter book biography by award-winning author Atia Abawi, readers learn about the amazing life of Sally Ride--and how she persisted. As the first American woman in space, Sally Ride broke barriers and made her dreams come true. But she wanted to do even more! After leaving NASA, she created science and engineering programs that would help other girls and women make their dreams come true as well. Complete with an introduction from Chelsea Clinton, black-and-white illustrations throughout, and a list of ways that readers can follow in Sally Ride's footsteps and make a difference! And don't miss out on the rest of the books in the She Persisted series, featuring so many more women who persisted, including Temple Grandin, Virginia Apgar, and more!

Praise for She Persisted: Sally Ride A well-rounded portrait not only of its subject but also of the obstacles faced by women in science and in astronautics. --The Horn Book

Atia Abawi (atiaabawi.com) is a foreign news correspondent who spent ten years living and working in Afghanistan and then the Middle East. She was born to Afghan parents in West Germany and was raised in the United States. She is the critically acclaimed author of The Secret Sky and A Land of Permanent Goodbyes. She currently lives in California with her husband, Conor Powell, their son, Arian, and their daughter, Elin. You can follow Atia on Twitter, Facebook and Instagram @AtiaAbawi.