She Proclaims - by Jennifer Palmieri 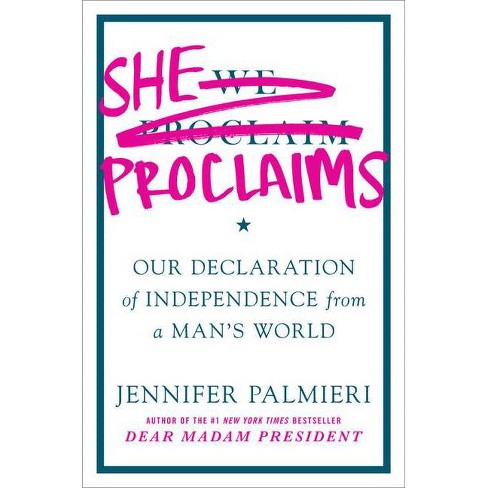 "When Jennifer Palmieri realized that everything in her life had been shaped by men, she wanted to make a change. From work behavior and use of language to wardrobe choices, she decided to follow her own convictions and reject paternalistic expectations. In an era of wage gaps, the Kavanaugh hearings, the #MeToo movement, and a domineering administration, Jennifer found a way to move beyond the bounds of patriarchy and wants to show readers a way out. Where Dear Madam President introduced a blueprint to succeed and the tools to prosper, She Proclaims gives readers the advice they need to to step out of a man's world and into their own. Jennifer believes that every woman has "power to change the world by changing the way she behaves in it." She Proclaims celebrates the accomplishments and history of the women's movement, and it will inspire you to be subversive, courageous, and bold. This book is a Declaration of Independence for women, broken into three types of sections: A preamble that expresses gratitude for the lessons of a man's world. An assertion: the time has come for women to declare their independence from a world not created for them. Each chapter begins with a "whereas" clause and includes advice for combatting the reality of living in a patriarchy. Through personal reflections and stories of other inspirational female leaders, Jennifer shares the key lessons she's learned from her journey to success"--

Take action and shatter the glass ceiling with this empowering and optimistic feminist guide from the #1 New York Timesbestselling author of Dear Madam President.
In an era marked by a frustrating sense of stagnation for women, Jennifer Palmieri has found a way to move beyond the bounds of
patriarchy. Building on the lessons shared in Dear Madam President, Palmieri argues that women have gone as far as they can in a world made for men, and it is time to break from it. She Proclaims declares what most women know in their souls but have yet to say out loud-that they deserve something better than a life where men hold a vast majority of power and women continue to be undervalued. It is a manifesto for the second century of feminism that no longer chases a man's elusive path but proclaims the value, ambition, and emotion women have had all along to change their world by changing how they engage in it. This book celebrates the accomplishments and history of the women's movement, and through personal reflections and stories of other inspirational female leaders, Jennifer shares concrete advice and insights she's learned from her journey out of a man's world that will inspire you to boldly chart your own course in life.

"She Proclaims delivers a rousing 21st century prescription for a path forward that refutes the notion of gender equality as a zero sum game. This is an essential crie de cour not only for all women who want to reach their full potential but for men who understand that systems of oppression ultimately defeat us all."--Tony Goldwyn, actor

"She Proclaims skillfully and movingly uses the stories of women who fought for our right to vote more than a hundred years ago to inspire women in America today to believe in the righteousness of our cause, break from the constraints that have traditionally held women back, and make our own path that improves the world."--Valerie Jarrett, former senior advisor to President Barack Obama and New York Times bestselling author of Finding My Voice

"She Proclaims is centered around the simple but profound recognition that the world as it is was never built for women. As women everywhere are realizing, the time for trying to retrofit ourselves to systems built by men and for men is over. As Jennifer writes, women have nothing left to prove; we are ready to build something better."--Cecile Richards, former president of Planned Parenthood and New York Times bestselling author of Make Trouble

"A spirited and accessible manifesto for women seeking to combat the patriarchy through both personal and collective action."--Publishers Weekly

"In Dear Madam President, Palmieri addressed the hypothetical first female president of the U.S., guided by her experience as former White House communications director for President Obama and director of communications for Hillary Clinton's 2016 presidential campaign. Now she expands her audience, encouraging every woman to realize her power...It will especially appeal to readers who responded to Sheryl Sandberg's Lean In."--Booklist

"Inspiring and invigorating, this brief, sharp call to action cries out for continued feminist action in order to create an American society based on 'equality for all.' A provocatively progressive declaration."--Kirkus Reviews

"Jennifer Palmieri guides us - women and men alike - into a deeper understanding of what true gender equality looks like. An empowering manifesto written with a generous spirit, She Proclaims provides us with new insight on women's past efforts, tools for the future, and inspiration for all of us to strive for the mutual empowerment that will benefit everyone."
--Connie Britton, actress

Praise for She Proclaims "She Proclaims reminds us that we, the people, are powerful. And while we stand on the shoulders of those who have come before, as an intersectional ceiling shattering movement we're just getting started."
--Congressional Representative AyannaPressley

"Jennifer knows the fundamental truth: ambition is not a dirty word. Women must embrace their own ambition and dare to dream big. Women will do things differently, and that's a good thing. Together, we will break down the barriers standing in our way."--Senator Kirsten Gillibrand

Jennifer Palmieri is the #1 New York Times bestselling author of Dear Madam President. She was the Director of Communications for Hillary Clinton's 2016 presidential campaign. She has previously served as the White House Communications Director for President Barack Obama and as National Press Secretary for the John Edwards presidential campaign in 2004 and the Democratic Party in 2002. She is currently President of the Center for American Progress Action Fund, frequently appearing on television, radio outlets, and lectures throughout the country.
If the item details above aren’t accurate or complete, we want to know about it. Report incorrect product info.