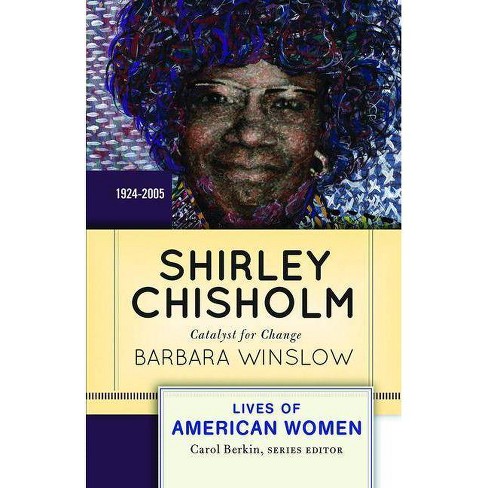 "An eclectic collection of books, readily accessible to students who will be able to see the contributions of women in many fields over the course of our history. Long overdue, these books will be a valuable resource for teachers, students, and the public at large."
Cokie Roberts, author of "Founding Mothers" and "Ladies of Liberty"
"For educators keen to include women in the American story, but hampered by the lack of thoughtful, concise scholarship, here comes Lives of American Women, embracing Abigail Adams s counsel to John remember the ladies. And high time, too!"
Lesley S. Herrmann, Executive Director, The Gilder Lehrman Institute of American History
Barbara Winslow delves into the complex, multi-layered, and deeply human reality of Shirley Chisholm. Winslow then tells a story we must know if we are to understand our own political moment. One in which a reelected black president governs alongside a Democratic Congressional delegation composed of a majority of women and racial minorities who were voted into office by an interracial coalition of voters led by women of color. This reality is quite literally unimaginable in the absence of Chisholm's trailblazing political career. This is a book that should have been written three decades ago, but now that it is here, it is required reading for all who claim to know American political history."
Melissa Harris-Perry, Director, Anna Julia Cooper Project on Gender, Race and Politics in the South Tulane University and Host of MSNBC's "Melissa Harris-Perry"
A staunch proponent of breaking down racial and gender barriers, Shirley Chisholm had the esteemed privilege of being a pioneer in many aspects of her life. She was the first African American woman from Brooklyn elected to the New York State legislature and the first African American woman elected to Congress in 1968. She also made a run for the Democratic Party nomination for president in 1972. Focusing on Chisholm s lifelong advocacy for fair treatment, access to education, and equal pay for all American minority groups, this book explores the life of a remarkable woman in the context of twentieth-century urban America and the tremendous social upheaval that occurred after World War II.
Barbara Winslow is professor and historian who teaches in the School of Education and for the Women's Studies Program at Brooklyn College. She is the founder and project director of the Shirley Chisholm Project of Brooklyn Women s Activism, a digital repository of information about Chisholm and about women s activism in Brooklyn.
Series Editor Carol Berkin is a well-known women s historian and the author of many popular and scholarly books, including "Civil War Wives." She is Professor of History Emerita at the Graduate Center of the City University of New York, and she is a member of the Society of American Historians."
If the item details above aren’t accurate or complete, we want to know about it. Report incorrect product info.