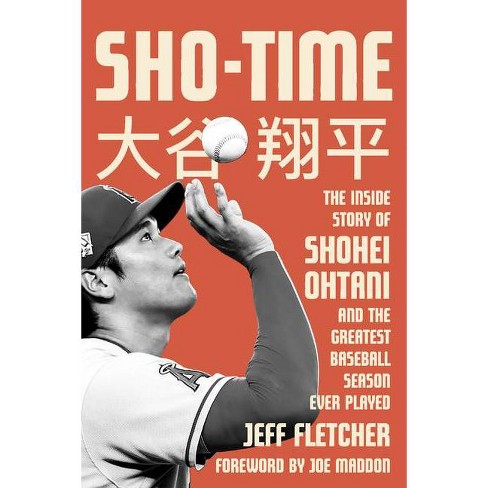 Fletcher traces Ohtani's path from his youth and time in Japanese baseball through the recruiting war to bring him to the majors to his historic 2021 season and his dominance as a two-way player--a pitcher and a hitter. He also looks at other great two-way players from history.

The story behind Shohei Ohtani's legendary MVP season as baseball's greatest two-way player--dominant pitcher and outfielder/DH with otherworldly power at the plate--and his path from his early days in Japan to the most fascinating figure in Major League Baseball, with a start-to-finish inside look at his historic 2021 season.
Shohei Ohtani of the Los Angeles Angels is playing baseball like no other major leaguer since Babe Ruth. His dominance as a two-way player--an electric pitcher and an elite slugger--made him the 2021 American League Most Valuable Player, the only player ever selected as an All Star as both a pitcher and hitter, and a member of Time 100's most influential people of 2021. In Ohtani's first two-way game of the 2021 season, he threw a pitch at 100 mph and hit a homer that left his bat at 115 mph, a confluence of feats unmatched by anyone else in the sport. He racked up eye-popping achievements all year. But awards and numbers tell only part of his amazing story. In Sho-Time, award-winning sports writer Jeff Fletcher, who has covered Ohtani more than any other American journalist, charts Ohtani's path through Japanese baseball to a championship with the Nippon-Ham Fighters, the recruiting war to bring him to the majors, his 2018 AL Rookie of the Year campaign, subsequent injury-riddled seasons, and then his historic 2021 season. Along the way, Fletcher weaves in the history of two-way players--including Babe Ruth and unsung Negro Leagues players like "Bullet" Joe Rogan, Martín Dihigo, and Ted "Double Duty" Radcliffe--and the Japanese athletes who preceded Ohtani in the majors. With insight from Japanese and American baseball front office personnel, managers, scouts, athletic trainers, ballplayers, and more, Sho-Time breaks down the physics of Ohtani's game, his technologically advanced training, his international fame, and the role he and teammate Mike Trout are playing to lead baseball into the next generation.

"Shohei is unique, obviously, someone we have never seen before. What he does and how he does it so easily is just different. But such a big part of who he is [...is his] pure joy for the game and the competition. [...] With all of the success he's had, he still has that joy. [...] That's Shohei: always competing and having fun doing it."
--from the foreword by Joe Maddon, World Series champion and former Los Angeles Angels Manager
"Shohei Ohtani was the biggest story of the 2021 season, and perhaps any season. In Sho-Time,
Jeff Fletcher masterfully chronicles not only what Ohtani accomplished
in '21, but also provides the full context to his achievements. From
Ohtani's origin story in Japan to his recruitment by the Angels, his
injury-marred 2019 and '20 seasons to his place in history next to Babe
Ruth, Fletcher's book is the definitive look at Ohtani's two-way
majesty." --Ken Rosenthal, Senior Writer at The Athletic "Historians
will be talking about Shohei Ohtani's 2021 season for decades, and
thankfully the baseball gods arranged for Jeff Fletcher to be there to
cover baseball's best two-way player ever in the midst of a pandemic, to
bear witness and mine details and write with grace about the sport's
most incredible individual performance." --Buster Olney, ESPN "Shohei Ohtani is a singular phenomenon in baseball, and there's nobody better to tell his story than Jeff Fletcher. Sho-Time
is the essential portrait of baseball's most captivating player,
chronicling Ohtani's rise from child prodigy in the snowy Iwate
Prefecture to two-way MVP sensation under the bright lights of Major
League Baseball. Fletcher goes beyond the carefully scripted press
conferences, revealing in vivid detail the challenges and triumphs of a
baseball journey like no other." --Tyler Kepner, The New York Times "OK,
I'll admit it. I'm obsessed with Shohei Ohtani. I missed out on
watching that Babe Ruth guy, but I feel lucky to have watched this guy. I
even thought I knew a lot about him until I opened my copy of Jeff
Fletcher's brilliant new book. Sho-Time
taught me so much I didn't know about the most unique baseball player
of our lifetimes. From the moment I read that phrase, '10-tool player, ' I
was hooked!" --Jayson Stark, The Athletic "This
is one the best baseball books ever published relevant to Japan-U.S.
relations. Jeff Fletcher is the most experienced of the Angels beat
writers, and usually the first one to ask Shohei Ohtani questions after
the game. I admire the way he has exchanged information with Japanese
writers for four years. This book is the fruit of his efforts. I always
follow Jeff's work in order to find new information relevant to Ohtani
or Major League Baseball." --Hideki Okuda, Sports Nippon "I
thought I knew everything about Shohei Ohtani because I had seen all of
his games and interviewed him for the first time in Tempe in 2018, but I
didn't quite know the extent of everything he did to redesign himself
on the physical and mental side until after I read Sho-Time.
I really appreciated learning about Ohtani's dedication to be the best,
starting from his days in Japan. I realized how much it took for him to
get to this point, to have the best year in baseball history." --Mark Gubicza, Angels television analyst
If the item details above aren’t accurate or complete, we want to know about it. Report incorrect product info.