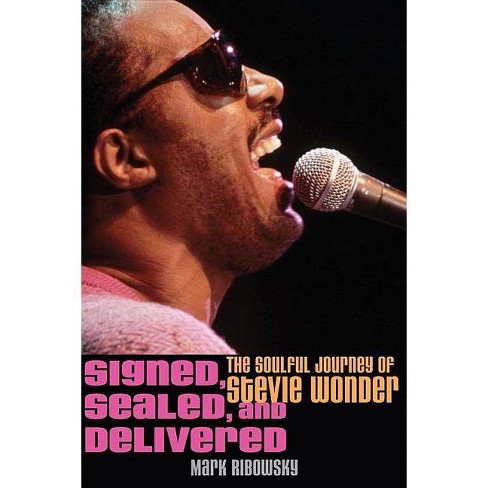 What do you call a performer who stunned the music world at the age of twelve, who had No. 1 hit records before, during, and well after the Beatles were recording, and whose influence has helped shape everything from soul, funk, and hip-hop to disco and smooth jazz? What words do justice to a musical master whose thirty-four top-10 hits and twelve top-10 albums have won a record twenty-two Grammy Awards, and who, after a brilliant fifty-year career, continues to be one of the most dynamic and sought-after performers in the world? Only two words can describe a superstar of that caliber--Stevie Wonder.

"Signed, Sealed, and Delivered" celebrates Stevie's sixtieth birthday with a full-fledged biography of this living, breathing musical genius and legend. Author Mark Ribowsky explores the life, achievements, and influence of one of America's biggest musical icons set against the history of Motown and the last fifty years of popular music.

Drawing on extensive interviews with Motown producers, music executives, songwriters, and musicians, including founding Temptation Otis Williams, Mickey Stevenson, Kim Weston, surviving Funk Brother Eddie Willis, and many others, Ribowsky sorts through conflicting accounts to reveal the truth behind how Stevie found his way to Motown Records at the tender age of eleven, why the name on his first Motown contract was not the one he was born with, and how he became "Little Stevie Wonder."

Ribowsky digs deep into Stevie's long and often strained relationship with Motown founder and control-freak-in-chief Berry Gordy. He reveals how one of Little Stevie's running pranks would exasperate Gordy and delight fellow Motown performers. He provides detailed and fascinating accounts of Motown's inner workings and how Stevie's role there evolved from wunderkind and enfant terrible to good soldier, top star, and major creative force. He also explains what was so remarkable about Stevie's first hit single "Fingertips (Part 2)," why it took more than two years to come up with his second hit, and why Marvin Gaye was booed off the stage following a performance by Stevie.

You'll also discover what Stevie Wonder loved about the Beatles and what he thought they didn't do very well, how he was influenced by Bob Dylan, how Stevie's friendly rivalry with Gaye turned into an important, though indirect, alliance for both, and much more.

Packed with little-known facts and keen insights into Stevie Wonder's musical growth and creative process, his successful collaboration with and failed marriage to Syreeta Wright, and his long struggle with sexual addiction and suicidal depression, "Signed, Sealed, and Delivered" is essential reading for all Stevie Wonder fans and anyone interested in the history of Motown and the music of the 1960s, 1970s, 1980s, 1990s, 2000s, 2010s . . .