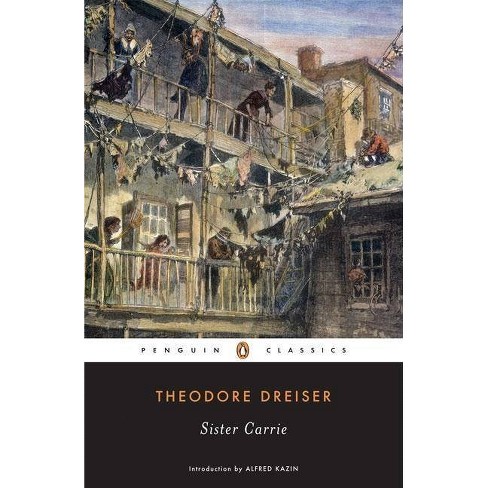 $13.59
MSRP$16.00
no reviews yet
be the first!be the first! ratings
Shipping
Free standard shipping with RedCard
Help us improve this page

"When a girl leaves home at eighteen, she does one of two things. Either she falls into saving hands and becomes better, or she rapidly assumes the cosmopolitan standard of virtue and becomes worse." With Sister Carrie, first published in 1900, Theodore Dreiser transformed the conventional "fallen woman" story into a genuinely innovative and powerful work of fiction. As he hurled his impressionable midwestern heroine into the throbbing, amoral world of the big city, he revealed, with brilliant insight, the deep and driving forces of American culture: the restless idealism, glamorous materialism, and basic spiritual innocence. Sister Carrie brought American literature into the twentieth century. This volume, which reprints the text Dreiser approved for publication during his lifetime and includes a special appendix discussing his earlier, unedited manuscript, is the original standard edition of one of the great masterpieces of literary realism. For more than seventy years, Penguin has been the leading publisher of classic literature in the English-speaking world. With more than 1,700 titles, Penguin Classics represents a global bookshelf of the best works throughout history and across genres and disciplines. Readers trust the series to provide authoritative texts enhanced by introductions and notes by distinguished scholars and contemporary authors, as well as up-to-date translations by award-winning translators.
If the item details above aren’t accurate or complete, we want to know about it. Report incorrect product info.