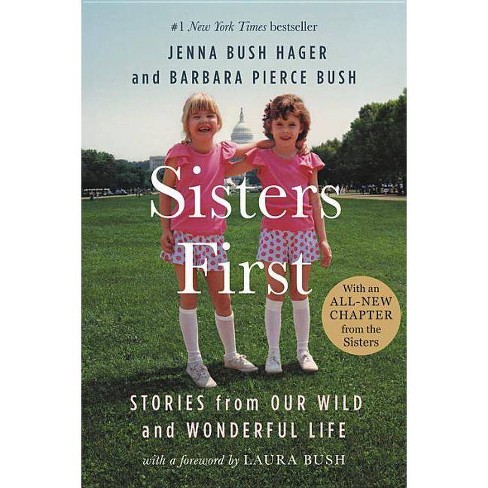 "With an ALL-NEW CHAPTER from the Sisters."--Cover.

The former first daughters share intimate stories and reflections from the Texas countryside to the storied halls of the White House and beyond. Born into a political dynasty, Jenna and Barbara Bush grew up in the public eye. As small children, they watched their grandfather become president; just twelve years later they stood by their father's side when he took the same oath. They spent their college years watched over by Secret Service agents and became fodder for the tabloids, with teenage mistakes making national headlines. But the tabloids didn't tell the whole story. In Sisters First, Jenna and Barbara take readers on a revealing, thoughtful, and deeply personal tour behind the scenes of their lives, as they share stories about their family, their unexpected adventures, their loves and losses, and the sisterly bond that means everything to them.

"An enjoyably nostalgic scrapbook stocked full of memories from twins born into a political dynasty."--Kirkus "Deeply personal, emotional and often funny...--People "In this funny and heartfelt memoir, the twin daughters of President George W. Bush and First Lady Laura Bush offer their perspective on growing up in the public eye...Readers will be entertained by this charming, wild, and wonderful pair of life stories."--Publishers Weekly (starred review) "The two first daughters emerge as surprisingly well-adjusted, intelligent young women with strong family bonds in this insightful look at life inside the White House."--Booklist "This illuminating work from the daughters of one of America's most well-known families offers a satisfying behind-the-scenes look into the personal side of politics."--Library Journal

Jenna Bush Hager is a correspondent on NBC's Today Show and an editor-at-large for Southern Living magazine. She is the author of the New York Times bestseller Ana's Story: A Journey of Hope, written after she served as an intern with UNICEF in Latin America. She also co-authored the children's books Our Great Big Backyard and Read All About It! with her mother. She lives with her husband and two daughters in New York. Barbara Pierce Bush is the CEO and co-founder of Global Health Corps, an organization that mobilizes a global community of young leaders to build the movement for health equity. GHC has mobilized almost one thousand young leaders who believe health is a human right and who take an innovative approach to solving some of the world's biggest global health challenges. Previously, Barbara worked at the Smithsonian's Cooper-Hewitt, National Design Museum, and Red Cross Children's Hospital in South Africa, and interned with UNICEF in Botswana.
If the item details above aren’t accurate or complete, we want to know about it.

Everything Beautiful in Its Time - by Jenna Bush Hager

All about Me! - by Mel Brooks

The Rock, the Road, and the Rabbi Bible Study Guide - by Kathie Lee Gifford (Paperback)

Get Up, Baby! - by Rick Hummel (Hardcover)

Everything Beautiful in Its Time - by Jenna Bush Hager

5 out of 5 stars
Would recommend
TR4ABill - 4 years ago, Verified purchaser
Gift to my wife for Christmas - she's about 1/2 way through the book so far and thoroughly enjoying it. Very highly recommended - gives good insight to the Bush family and the Bush sisters growing up years.
Did you find this review helpful?