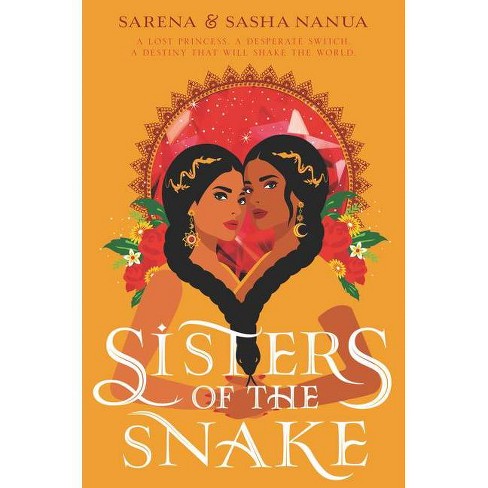 A lost princess. A mysterious puppet master. And a race against time--before all is lost.

Princess Rani longs for a chance to escape her gilded cage and prove herself. Ria is a street urchin, stealing just to keep herself alive.

When these two lives collide, everything turns on its head: because Ria and Rani, orphan and royal, are unmistakably identical.

A deal is struck to switch places--but danger lurks in both worlds, and to save their home, thief and princess must work together. Or watch it all fall into ruin.

Deadly magic, hidden temples, and dark prophecies: Sisters of the Snake is an action-packed, immersive fantasy that will thrill fans of The Wrath & the Dawn and The Tiger at Midnight.

"A decadent and enthralling debut, Sisters of the Snake lures readers into a dark and twisted world of intoxicating magic, starcrossed sisters, and heart pounding romance. Sasha and Sarena Nanua are a powerhouse duo to watch!" -- Dhonielle Clayton, New York Times bestselling author of The Belles and Tiny Pretty Things

"Sisters of the Snake kept me on tenterhooks even as it thoroughly entertained me. Fast-paced and magical, this book introduces two bright new voices to YA lit. I can't wait to see more from Sarena and Sasha Nanua!" -- Tanaz Bhathena, author of Hunted by the Sky

"Themes of fate, identity, and sisterhood intertwine in this lush fantasy that incorporates Indian cultural elements into its worldbuilding. A fresh take on a classic tale." -- Kirkus Reviews

A Forgery of Roses - by Jessica S Olson

Nobody Does It Better - (Gossip Girl) by Cecily Von Ziegesar (Paperback)

Sisters of the Snake - by Sasha Nanua & Sarena Nanua (Paperback)

Three Sisters and the Black Snake - by Theresa Chao Rother

One Hour - (The Johnson Sisters Trilogy) by Elaine Marie (Paperback)