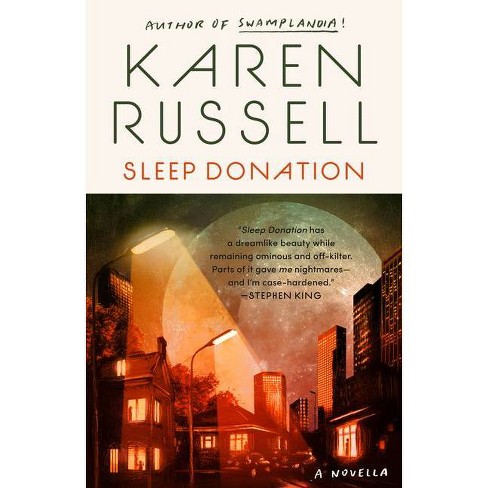 "Sleep Donation has a dreamlike beauty while remaining ominous and off-kilter. Parts of it gave me nightmares--and I'm case-hardened." --Stephen King "[Written] with Twilight Zone-like inventiveness and the energy and brio of a natural fantasist with a proclivity for blending the real and surreal, the psychological and the sci-fi. . . . [Russell] creates a fully imagined world with its own rituals and rules, and deftly satirizes the media and governmental responses to the plague of sleeplessness. . . . Another testament to her fertile powers of invention." --Michiko Kakutani, The New York Times Book Review "A starkly dystopian novella reminiscent of George Saunders in its bleak humor, the directness of its prose." --Los Angeles Times

"Russell's gift is to provide deep immersion in the details, and in Trish's haunting, urgent emotions. . . . Russell offsets . . . expertly induced unease with humour and wry social commentary." --The Guardian "Wonderful. . . . Like George Saunders, Russell writes with a Swiftian sense of satire. . . . Russell has a keen sense of dramatic timing and an even sharper ability to turn an internal state into its own weather system." --The Boston Globe "The combination of Russell's dazzling imagination and virtuosic prose adds up to pleasurable sensory overload." --Entertainment Weekly "Russell handles the extraordinary in a humorous manner. . . . Sleep Donation's magical realism flare makes it not your average dystopia." --GQ "Russell specializes in creating fantastical worlds that hum with recognizable rhythms. She excels at marrying the commonplace with the extraordinary." --Miami Herald "Signature Russell: a fanciful, droll, elaborately thought-through allegory with a dark center. . . . Russell's language . . . is acrid, luminous, and deft. . . . She will chase down every flicker of ordinary experience and return with descriptions of uncanny aptness. . . . Her sentences both resonate with familiarity and startle with beauty." --Slate "Weird, hilarious, and brilliant." --The Millions "An audaciously allegorical novella. . . . As engaging as it is provocative." --Kirkus Reviews (starred review)
If the item details above aren’t accurate or complete, we want to know about it. Report incorrect product info.