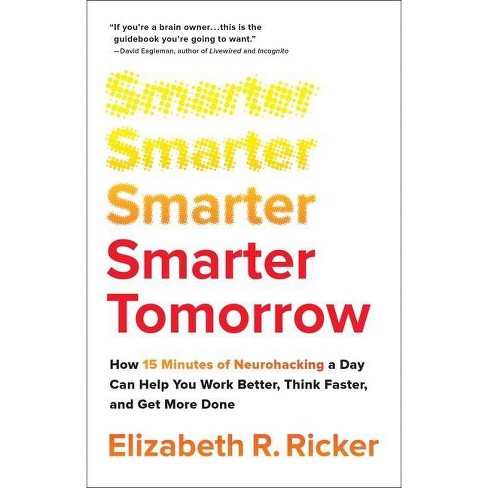 Want to upgrade your brain? Learn how in 15 minutes a day. One catch: you'll need to become a human guinea pig first.

What if you could upgrade your brain in 15 minutes a day? Let Elizabeth Ricker, an MIT and Harvard-trained brain researcher turned Silicon Valley technologist, show you how. Join Ricker on a wild and edifying romp through the cutting-edge world of neuroscience and biohacking. You'll encounter Olympic athletes, a game show contestant, a memory marvel, a famous CEO, and scientists galore. From Ricker's decade-long quest, you will learn: ● The brain-based reason so many self-improvement projects fail . . . But how a little-known secret of Nobel Prize winning scientists could finally unlock success
● Which four abilities--both cognitive and emotional--can predict success in work and relationships . . . and a new system for improving all four
● Which seven research-tested tools can supercharge mental performance. They range from low-tech (a surprising new mindset) to downright futuristic (an electrical device for at-home brain stimulation) Best of all, you will learn to upgrade your brain with Ricker's 20 customizable self-experiments and a sample, 12-week schedule. Ricker distills insights from dozens of interviews and hundreds of research studies from around the world. She tests almost everything on herself, whether it's nicotine, video games, meditation, or a little-known beverage from the Pacific islands. Some experiments fail hilariously--but others transform her cognition. She is able to sharpen her memory, increase her attention span, boost her mood, and clear her brain fog. By following Ricker's system, you'll uncover your own boosts to mental performance, too. Join a growing, global movement of neurohackers revolutionizing their careers and relationships. Let this book change 15 minutes of your day, and it may just change the rest of your life!

"...examines the process and promise of neurohacking in her thorough debut....Ricker's highly systematized processes will appeal to those deeply into the self-optimization scene." --Publisher's Weekly

"A new book explaining how to optimize your nervous system condenses the best of psychology and neuroscience, which makes it almost perfect." --Fair Observer

"Brilliant...While many of us are out of school now, there are still people out there who make intelligence cool--and show us how we can become smarter ourselves."--The Next Big Idea Club (book club from Malcolm Gladwell, Adam Grant, Susan Cain, and Daniel Pink)

"Those interested in adding rigor to their self-improvement journeys have no better place to turn than Smarter Tomorrow."--Wall Street Journal

"With a scientist's eye and an explorer's heart, Ricker sets out to optimize everything from cognition to creativity. If you're a brain-owner, you should be running experiments on yourself -- and this is the guidebook you're going to want."--David Eagleman, author of Livewired and Incognito

Elizabeth Ricker has given talks on cognitive enhancement and neurohacking across the US and overseas. She is a sought-after expert by Silicon Valley venture capital firms, technology startups, schools, and a Fortune 500 company. Ricker's work has been featured on public broadcast TV in Europe and in the March for Science's book Science Not Silence. Ricker received her undergraduate degree in Brain and Cognitive Sciences from MIT and her graduate degree in Mind, Brain, and Education from Harvard. In college, she worked in the neuroscience lab of Nobel Prize winner Dr. Susumu Tonegawa. Ricker was also a varsity college athlete and class president-- a role occasionally involving such serious duties as dressing up in a giant rodent costume to play Tim the Beaver, the MIT mascot.

For author updates and access to neurohacking tools and resources, visit ericker.com.