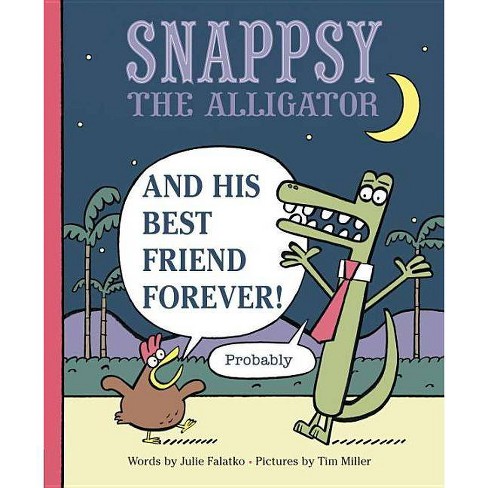 $12.39
no reviews yet
be the first!be the first! ratings
Buy 2 get 1 free on select movies and kids' books
In-store or Online •
Shipping
Free standard shipping with RedCard
Loading, please wait...
Help us improve this page

A Junior Library Guild Selection PRAISE FOR SNAPPSY THE ALLIGATOR AND HIS BEST FRIEND FOREVER (PROBABLY): "Falatko and Miller brilliantly add depth to the characters' story arc."
--Kirkus Reviews PRAISE FOR SNAPPSY THE ALLIGATOR (DID NOT ASK TO BE IN THIS BOOK) "A charming, irreverent tale for independent-minded tots."
--People Magazine "This is the first book for both Falatko and Miller, and it's an excellent one--Falatko's writing nimbly zigs and zags around Miller's bold, goofy cartoons."
--Publishers Weekly, STARRED REVIEW! "More than merely meta, Snappsy is clearly a book, if not a protagonist, with bite."
--Kirkus Reviews, STARRED REVIEW! "Falatko's debut picture book is atruly laugh-out-loud, mischievous romp, made gleefully goofier by Miller's straight-laced, deadpan animalcharacters."
--Booklist, STARRED REVIEW! "Filled with exploration-worthy detail... overdocumented youngsters may feel some sympathy for Snappsy, and audiences...will giggle at his battle with the overexcited narrator."
--BCCB, STARRED REVIEW! "This clever debut will renew faith in the possibilities of fourth-wall breaking."
--The New York Times "A silly, clever introduction to the idea of the unreliable narrator."
--The Boston Globe "One of the funniest picture books of the year. . . . utterly irresistible."
--BookPage "Falatko's debut book demonstrates the power of storytelling through words and pictures."
--School Library Journal "Distinguished by Falatko's ability to sustain the tension at length; by Miller's savory palette... and by the unvoiced suggestion that when fiction is working well, a character can take on a life of his or her own."
--Horn Book Magazine "This one goes to the top of the meta-heap. Snappsy the Alligator is a wonderful exploration of subjectivity... and a lot of fun."
--Shelf Awareness "If a pesky narrator did THAT to ME, I'D bite 'em right on the--*AHEM* Great job with your creative conflict resolution, Snappsy!"
--Ame Dyckman, New York Times bestselling author of Wolfie the Bunny and Boy + Bot "Adam Rex didn't ask to be on this book either. But despite being a mean man who generally dislikes debut authors he is a fan of Snappsy the Alligator."
--Adam Rex, New York Times bestselling author of Schools First Day of School "Modern storytelling that never compromises, page after hilarious page."
--Bob Shea, author of Ballet Cat
If the item details above aren’t accurate or complete, we want to know about it. Report incorrect product info.