So You Call Yourself a Man - (Church) by Carl Weber (Paperback) 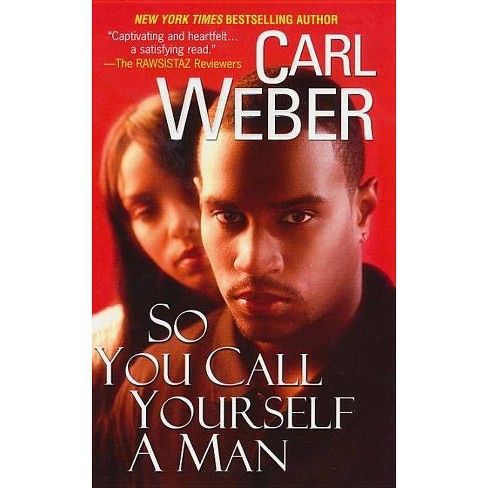 $14.99
MSRP$16.00
no reviews yet
be the first!be the first! ratings
Shipping
Free standard shipping with RedCard
Loading, please wait...
Help us improve this page

Carl Weber, the New York Times bestselling author of Up to No Good, will keep you on edge with this tale of three lifelong friends. . .

James Robinson and his wife have had their rough patches. But seven years into their marriage, things are better than ever...until James's past comes back to haunt him-with a baby in tow.

James's best friend, Brent Williams, has always had women throwing themselves at him, but it's taken Brent a while to find someone who wants him for the man he is on the inside. His plus-sized fiancï¿½e isn't his usual type, but they seem like a match made in heaven-until a sexy third party comes along...

When Sonny Harrison's wife sends him packing, he's lonely until he reunites with his high school sweetheart. But as his feelings for her get a little too intense, Brent and James may be the only ones who can intervene. But will that mean losing their friend forever?

Call me kinky, but there is nothing in the world that turns me on more than hearing a woman scream pleasurable obscenities as I make love to her. And that's exactly what my lovely wife, Cathy, was doing as I held onto her hips and plunged into her from behind. Our two boys, James Jr. and Michael, were with my mother for the weekend, and Cathy and I were taking advantage of their absence by spending some quality time together. We'd gone out to dinner with my buddy Brent and his fiancï¿½e, Alison, taken in a movie, then came home and finished off a bottle of wine before making love on the living room sofa. We were now on our second round in our bedroom, going at it like two lusty college students in heat.

"I love you, James," my wife moaned affectionately, clutching the sheets as one climax took over for another.

"I love you too," I growled back as my body stiffened and my own pleasure erupted.

Totally spent, Cathy lay flat on her stomach while I gently collapsed onto her back, gasping for air. After a brief recovery, I slid my sweat-soaked body off hers. She snuggled up next to me and I wrapped my arm around her, pulling her in close, her back to my front. I was so exhausted, I wanted to just close my eyes and let the sedative of sex take me to dreamland. But I couldn't do that because it was against the rules-rules we'd created almost two years ago to keep our marriage together. Rules that had made this the happiest two years of my life. Somehow, I was going to have to force myself to stay awake at least ten more minutes and talk to her before allowing myself the enjoyment of sleep.

I kissed her neck, whispering in her ear, "You okay? Do you want me to go down on you or anything?"

"No, baby. I'm fine just like this. All I want you to do is hold me." I did as I was told and she snuggled her backside against me. A few seconds later, I could hear her snoring lightly.

I loved Cathy more than anything in the world. Sure, we had our problems over the years like most couples. Hell, I even thought we were gonna divorce a few years ago, but we worked it out and things had never been better as far as I was concerned. I couldn't see myself with any other woman. I'd loved her since the day we met in our junior year at Virginia State University. She was my soul mate, and I'd do anything and everything to keep her and my boys safe and out of harm's way. I kissed her neck again, then dozed off to sleep.

I couldn't have been asleep more than five or ten minutes before my cell phone rang. Instinctively, I reached over and picked it up