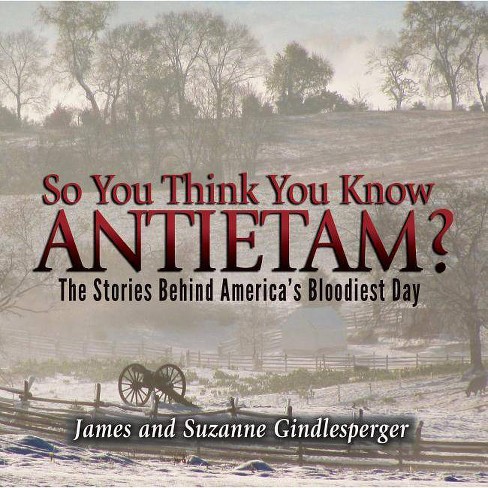 $17.39
undefined out of 5 stars with 0 reviews
be the first!be the first! ratings
Help us improve this page

September 17, 2012, marks the 150th anniversary of the Battle of Antietam--America's bloodiest day. To the people in the North it was Antietam, after the stream whose name translated from the Native American as the swift current. Those in the South referred to it as Sharpsburg, after the nearby town. Whatever the name, this much is undisputed: it was the bloodiest one-day battle in United States history. Following just 12 hours of combat, some 23,000 American soldiers were killed, wounded, or missing. The site of the battle of Antietam is remarkably preserved and looks much the same today as it did on that fateful day 150 years ago. Administered by the National Park Service, the Antietam National Battlefield contains nearly 100 monuments, each with its own story.

So You Think You Know Antietam? honors those who took part in this darkest of days in our nation's history by telling the stories behind the monuments. Who designed the monuments and what do the symbols represent? Why are no Confederate soldiers buried in the national cemetery? What connection did Clara Barton have with the battle? Who was Johnny Cook and what did he do? Written with casual visitors and armchair travelers in mind, So You Think You Know Antietam? answers the above questions and more. Readers will learn some of the lesser known stories about Antietam and the human side of war through poignant vignettes that reveal the ironies and tragedies not normally found in typical guidebooks. Featuring close to 300 color photos, 10 color-coded chapters and maps, and GPS coordinates of all monument locations, So You Think You Know Antietam? is a well-organized, attractive book meant to enrich the reader's experience.

James and Suzanne Gindlesperger are the authors of So You Think You Know Gettysburg?, which was the bronze winner in the travel guide category for ForeWord Reviews' Book of the Year Award in 2010. James is a "Friend of the Field" at Gettysburg and the author of three books about the Civil War: Escape from Libby Prison, Seed Corn of the Confederacy, and Fire on the Water. Suzanne is the cofounder of Pennwriters, a professional organization of published and aspiring authors. The couple lives in Johnstown, Pennsylvania.