Some Kind of Happiness - by Claire Legrand 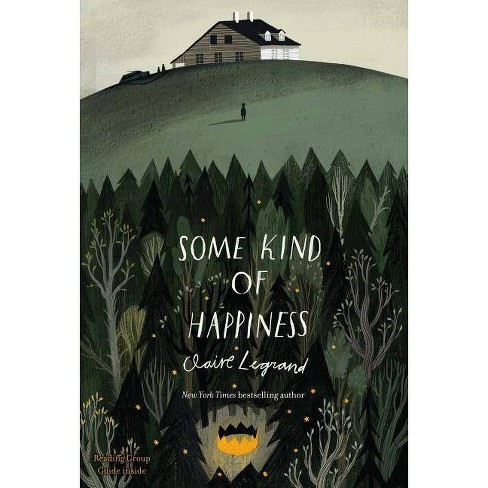 Reality and fantasy collide in this "beautiful and reflective tale" (Booklist, starred review) for fans of Counting by 7s and Bridge to Terabithia, about a girl who must save a magical make-believe world in order to save herself. Things Finley Hart doesn't want to talk about:
-Her parents, who are having problems. (But they pretend like they're not.)
-Being sent to her grandparents' house for the summer.
-Never having met said grandparents.
-Her blue days--when life feels overwhelming, and it's hard to keep her head up. (This happens a lot.) Finley's only retreat is the Everwood, a forest kingdom that exists in the pages of her notebook. Until she discovers the endless woods behind her grandparents' house and realizes the Everwood is real--and holds more mysteries than she'd ever imagined, including a family of pirates that she isn't allowed to talk to, trees covered in ash, and a strange old wizard living in a house made of bones. With the help of her cousins, Finley sets out on a mission to save the dying Everwood and uncover its secrets. But as the mysteries pile up and the frightening sadness inside her grows, Finley realizes that if she wants to save the Everwood, she'll first have to save herself.

"Finley's marvelous adventure will resonate with anyone who has battled a broken heart through the power of story. The courage she finds along the way will leave you cheering - and believing in magic - even in the darkest part of the woods."--Natalie Lloyd, author of A SNICKER OF MAGIC

"Imagine if Wednesday Addams had written THE PRINCESS BRIDE and you've got some kind of idea of SOME KIND OF HAPPINESS -- a dark and meditative fantasy written with Claire Legrand's signature light touch."--Tim Federle, author of BETTER NATE THAN EVER

*Nominated by the Mystery Writers of America for the 2017 Edgar Award* *"Legrand handles the tough subject of childhood mental health gently and honestly, and. . . . paints a realistic picture of a girl trying to figure out what's wrong with her. Finley's quest to uncover family secrets reveals not just what kept her father away from his relatives but how a family sticks together through good times and bad."-- "Publishers Weekly, Starred Review"

*A quiet magic is at work in Legrand's novel, in which she adeptly interweaves Fin's imaginative writing with the real-life narrative, underpinning all with an appeal to honesty and self-acceptance. This beautiful and reflective tale carries echoes of Katherine Patterson's The Bridge to Terabithia (1977) and will resonate with thoughtful readers who enjoy pondering life's bigger questions.-- "Booklist, STARRED REVIEW"

A multilayered plot, engaging characters, and more than one mystery highlight this ambitious novel. . . . Legrand successfully weaves it all into a rich, nuanced tale that culminates in a convincing and satisfying conclusion.-- "School Library Journal"

Legrand has pulled off a difficult trick in this novel. She's constructeda story-within-a-story fairy tale that's utterly compelling but sounds asthough it was written by an 11-year-old girl. . . . A layered, thoughtful exploration.-- "Kirkus Reviews"

Claire Legrand used to be a musician until she realized she couldn't stop thinking about the stories in her head. Now Ms. Legrand is a full-time writer living in New Jersey. She has written two middle grade novels--The Cavendish Home for Boys and Girls, one of the New York Public Library's 100 Titles for Reading and Sharing in 2012, and The Year of Shadows--as well as the young adult novel Winterspell. Visit her at Claire-Legrand.com and on Twitter @ClaireLegrand. Júlia Sardà is an illustrator from Barcelona. After her studies, Júlia started working as colorist in a studio which made the editorial merchandising for Disney/Pixar and then moved on to freelancing two years later. With work ranging from concept art for video games to children's illustration, Júlia has had the chance to illustrate some everlasting classics such as Alice in Wonderland; The Wonderful Wizard of Oz; and Charlie and the Chocolate Factory. Visit her online at JuliaSarda.com.
If the item details above aren’t accurate or complete, we want to know about it. Report incorrect product info.