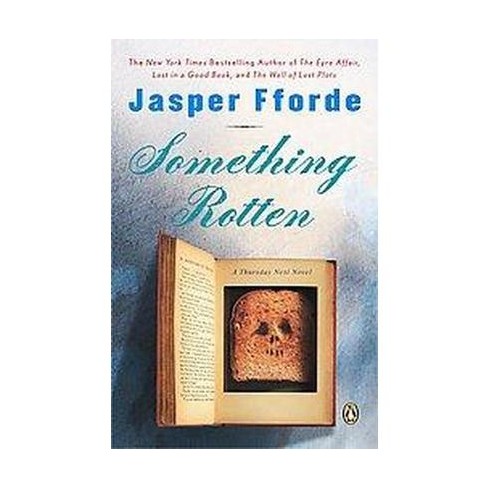 Two years after Thursday Next's Ultraworld adventure, the now ex-head of Jurisfiction returns home. But the Swindon to which Thursday returns is not the one she left, for something is rotten in the state of England.

The popularity of Jasper Fforde's one-of-a-kind series of genre-bending blend of crime fiction, fantasy, and top-drawer literary entertainment builds with each new book. Now in the fourth installment, the resourceful literary detective Thursday Next returns to Swindon from the BookWorld accompanied by her son Friday and none other than the dithering Hamlet. But returning to SpecOps is no snap--as outlaw fictioner Yorrick Kaine plots for absolute power, the return of Swindon's patron saint foretells doom, and, if that isn't bad enough, The Merry Wives of Windsor is becoming entangled with Hamlet. Can Thursday find a Shakespeare clone to stop this hostile takeover? Can she vanquish Kaine and prevent the world from plunging into war? And will she ever find reliable child care? Find out in this totally original, action-packed romp, sure to be another escapist thrill for Jasper Fforde's legions of fans.

"It's easy to be delighted by a writer who loves books so madly."
--The New York Times

"Impressive, and arguably Fforde's best work to date. It is a compliment to the author's skill and creativity that his humor remains fresh and his central character gains depth."
--The Denver Post

"More than a little wacky, the novel is packed with screwball details as characters get 'written' in and out of the story, hybridized creatures stalk malls and Shakespeare clones start popping up everywhere. With humorous illustrations and curious footnotes sprinkled throughout, Fforde's latest will have hardcore fans roaring."
--Publishers Weekly

"Prepare to be delighted."
--Time

Jasper Fforde traded a varied career in the film industry for staring vacantly out of the window and arranging words on a page. He lives and writes in Wales. The Eyre Affair was his first novel in the bestselling series of Thursday Next novels, which includes Lost in a Good Book, The Well of Lost Plots, Something Rotten, First Among Sequels, One of Our Thursdays is Missing, and The Woman Who Died A Lot. The series has more than one million copies (and counting) in print. He is also the author of The Big Over Easy and The Fourth Bear of the Nursery Crime series, Shades of Grey, and books for young readers, including The Last Dragonslayer. Visit jasperfforde.com.
If the item details above aren’t accurate or complete, we want to know about it. Report incorrect product info.