Son of a Southern Chef - by Lazarus Lynch (Paperback) 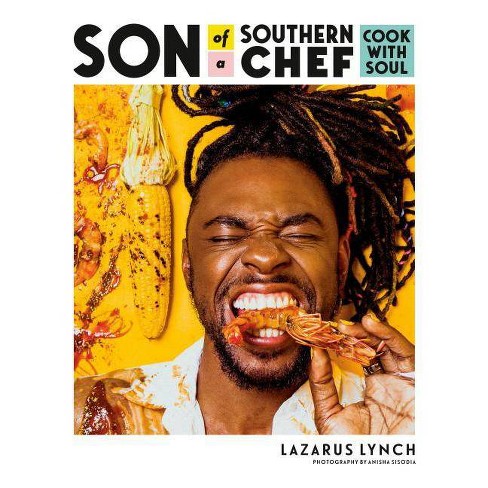 A wildly inventive soul food bible from a two-time Chopped winner and the host of Snapchat's first-ever cooking show. Thousands of fans know Lazarus Lynch for his bold artistic sensibility, exciting take on soul food, and knockout fashion sense. Laz has always had Southern and Caribbean food on his mind and running through his veins; his mother is Guyanese, while his father was from Alabama and ran a popular soul food restaurant in Queens known for its Southern comfort favorites. He created Son of a Southern Chef on Instagram as a love letter to the family recipes and love of cooking he inherited. In his debut cookbook, Laz offers up more than 100 recipe hits with new takes on classic dishes like Brown Butter Candy Yam Mash with Goat Cheese Brülée, Shrimp and Crazy Creamy Cheddar Grits, and Dulce de Leche Banana Pudding. Packed with splashy color photography that pops off the page, this cookbook blends fashion, food, and storytelling to get readers into the kitchen. It's a Southern cookbook like you've never seen before.

"It's a great cookbook . . . Beautiful."--The Today Show "His Alabaman-born dad and Guyanese mom's influences meld in recipes like extra-creamy shrimp and grits, made with unsweetened coconut milk."--Martha Stewart Living

"Son of a Southern Chef overflows with expressions of self-love.--The Washington Post "The book is a joy to read (and may have also inspired a Beyoncé dance party in my kitchen)."--Rachael Ray Every Day, Cookbook Crush Feature An uninhibited, personal celebration of his family's cooking and African-American foodways.--Grub Street Lazarus Lynch cooks with his whole heart in Son of a Southern Chef.--Salon Flipping through Lynch's debut cookbook is like stepping into a pop art gallery. With colorful and kitschy photographs, vibrant recipes inspired by Southern and Caribbean cooking, and personality for days, this cookbook is sure to add a splash of color to your kitchen.--BuzzFeed "Today, Lynch brings a casual vibrancy to his online cooking demos (his tagline: 'Make it gravy!') and new cookbook, Son of a Southern Chef: Cook with Soul."--The New York Post "Lynch's first-ever book is truly one of 2019's most joyful food-related texts. The photos by Anisha Sisodia, the food styling and Lynch's all-caps enthusiasm feels so fresh and needed."--Time Out New York

"Lazarus honors his late father and puts a modern spin on his parents' favorite recipes to create punchy, delicious dishes."--KTLA Morning News "It's absolutely gorgeous!"--Hallmark Home & Family "Lazarus Lynch puts the 'I' in individual and the 'S' in style. His new cookbook will remind you to enter the kitchen with joy, inspire you to cook boldly, and go where you've never gone before."--Carla Hall, Chef and Author of Carla Hall's Soul Food

"Imagine if Prince wrote a cookbook while channeling the spirit of 7,000 West African, Caribbean, and Southern grandmothers with photography by David LaChapelle and art direction by Tyler the Creator. Enter Lazarus Lynch. Son of a Southern Chef is a magical cookbook filled with all the contradictions you'd expect from a culinary (and musical) virtuoso--it's avant-garde yet grounded in tradition, hood yet haute, mischievous yet earnest in its intent to push the boundaries of how we imagine Black food. This cookbook is dripping with all the swag and creativity that fans have loved since Lynch came on the scene in 2014, and he truly is the Rockstar Chef we've all been waiting for."--Bryant Terry, James Beard award-winning author of Afro-Vegan "I've watched Lazarus Lynch grow as a person and as a food authority for years. I'm thrilled that America can now have a little bit of Lazarus in their homes with the launch of his first cookbook. Get ready for some serious soul. Mr. Lynch will take you there."--Bobby Flay

"Son of a Southern Chef is a visually stunning exploration of what soul food really is, which is food made with love and with loved ones. Lazarus' personality shines through delicious recipes and dynamic pictures. This is definitely a book you will want to visit time and time again."--Marcus Samuelsson, award-winning chef, restaurateur, and co-owner of Red Rooster Harlem

Lazarus Lynch is an African-American entrepreneur, author, musician, multimedia host, and the face of Son of a Southern Chef. He is a two-time Chopped champion and the host of Snapchat's first-ever cooking show, Chopped U, and the Food Network digital series Comfort Nation. His website was a 2017 Saveur Blog Awards nominee. Lazarus has appeared on The Cooking Channel, BuzzFeed, Tastemade, NPR, and The Today Show. He lives in New York City, where he was raised.
If the item details above aren’t accurate or complete, we want to know about it. Report incorrect product info.