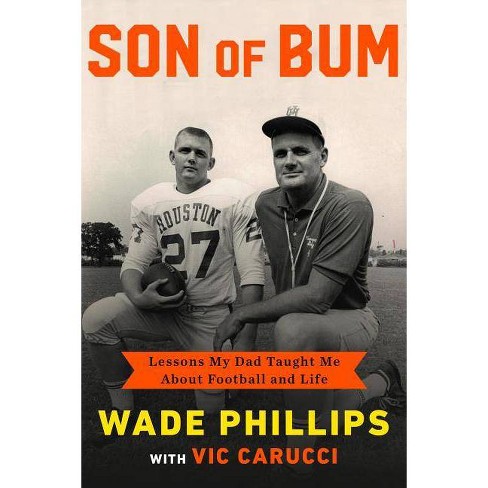 "Having played for and against Wade Phillips, the first word that comes to my mind is respect. SON OF BUM is a great read about the Xs and Os from one of the greatest coaches in the league, as well as a loving tribute to the influence of family." --Peyton Manning "Wade is a breath of fresh air in the NFL--and this book is too. I've been blessed to know him for nearly 40 years. Like his dad--an old pal too--he is a genius! He can tell a story better than anyone in the league with that Texas down home wit and honesty. SON OF BUM is sensational!" --Jim Nantz, sports commentator and author of Always by My Side "Wade Phillips has been a tremendously successful NFL Head Coach and maybe the best Defensive Coordinator ever because his players know he is committed to them as people and to their success. But most of all, as Captain Woodrow Call said in Lonesome Dove about a fellow fallen Texas Ranger, Phillips is 'Cheerful in all weather, never shirked a task, and exhibits splendid behavior.'" --Mike Leach, Head Coach, Washington State Cougars, and author of Swing Your Sword "Touching, revealing and worthy of a movie, SON OF BUM is the rare sports book that makes you want to hug your dad one more time--and harder than ever before. Football fans will devour this for the Xs and Os insight; I couldn't put it down because of a son's vividly described love for his old man." --Lars Anderson, sports writer, author of The Mannings and The Storm and the Tide "Going back to the great battles between the Houston Oilers and the Pittsburgh Steelers in the 1970s, I have been able to enjoy almost four decades of great coaching and great stories from Bum and Wade Phillips. Come along for a great football ride that takes you through the great stories, great coaching, and great insights in SON OF BUM." --John Clayton, sports writer, ESPN "Wade Phillips is a creative coaching genius whose defenses have been so overpowering they have altered the course of the NFL. His effervescent, optimistic, caring attitude has endeared generations of coaches and athletes to him and his story and life philosophy can enrich readers." --Leigh Steinberg, sports agent and author of Winning with Integrity and The Agent
If the item details above aren’t accurate or complete, we want to know about it. Report incorrect product info.