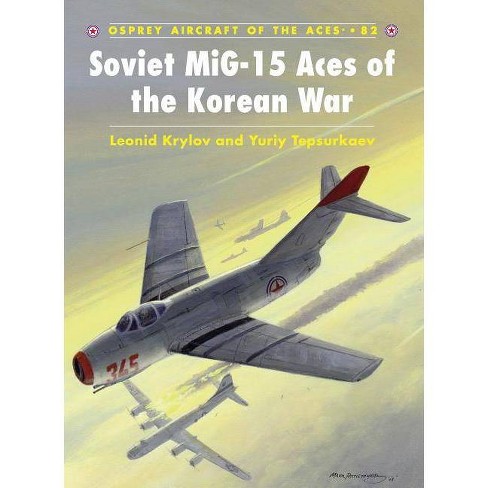 "Soviet MiG-15 Aces of the Korean War is well-written and organized very nicely. It is extremely well researched and documented, and provides an insight into the Soviets previously well-hidden involvement during the Korean War. This book could be a valuable historical reference for anyone who chooses to model aircraft from this historical period, and I recommend it highly to anyone interested in the air war in Korea." --Keith Pruitt, International Plastic Modellers' Society (July 2008)

"Leonid Krylov and Yuriy Tepsurkaev's Soviet MiG-15 Aces of the Korean War joins others in Osprey's 'Aircraft of the Aces' series, providing a comprehensive survey of how the USSR's top plane performed and made a big difference in Korea, surveying the first generatio of jet fighters in Korea. Pilot exploits are covered in black and white and color here." --The Bookwatch (September 2008)

"In addition to the excellent photos, there are several pages of color profiles of the planes flown by the various aces involved. It is a superlative book on the subject and one that I can recommend to you without reservation." --Scott Van Aken, modelingmadness.com (June 2008).

"...it seems astonishing that now Osprey is able to publish a complete-very complete- book on the subject. Remarkable pilot accounts provide an inside look beyond anything that I thought I would ever be ale to read, allied with a detailed history of the units, aircraft and men involved." --Scale Aircraft Modelling (August 2008).