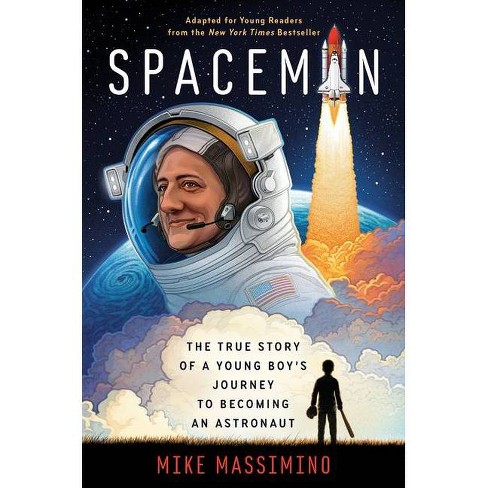 An astronaut who completed spacewalks on two Hubble missions tells his inspiring story in this middle grade adaptation of his bestselling adult memoir, Spaceman: An Astronaut's Unlikely Journey to Unlock the Secrets of the Universe. Fans of The Right Stuff and Apollo 13 will be thrilled by this astronaut's real life adventure. From the time he was seven-years-old and saw Apollo 11 land on the moon, Mike Massimino dreamed of becoming an astronaut. Long Island is a long way from space. Kids like him, growing up in working-class families, seldom left the neighborhood. But with the encouragement of teachers and mentors, Mike ventured down on a path that took him to Columbia University and to MIT. It wasn't easy. There were academic setbacks and disappointments aplenty--and NASA turned him down three times. Still, Mike never gave up. He rose to each challenge and forged ahead, inching closer to realizing his boyhood dream. His love of science and space, along with his indomitable spirit and sense of teamwork eventually got him assigned to two missions to fix the Hubble Space Telescope--as a spacewalker. Spaceman takes readers on Mike's unlikely ride from Earth to space, showing the breathtaking wonder of science and technology along the way. Mike Massimino is a spaceman through and through. In this edition for young people, he tells us how hard work can take you out of this world. He believes in teamwork, and he never gives up. Prepare to be inspired. --BILL NYE, SCIENCE GUY and CEO, THE PLANETARY SOCIETY

Mike Massimino is a spaceman through and through. In this edition for young people, he tells us how hard work can take you out of this world. He believes in teamwork, and he never gives up. Prepare to be inspired. --BILL NYE, Science Guy and CEO, The Planetary Society A grand, inspiring, sometimes hilarious ride. -Kirkus Reviews From his childhood days peering up at the sky to his struggles to find his life's calling, Massimino's story will inspire many kids. -School Library Journal

An inspirational guide for young people on their own life journeys." -Booklist

MIKE MASSIMINO served as a NASA astronaut from 1996 to 2014. A veteran of two space flights to the Hubble Space Telescope, Mike and his crews set team records for spacewalking time, and he became the first person to tweet from space. He has played himself on the CBS sitcom The Big Bang Theory, was featured in the IMAX film Hubble 3D, and has appeared frequently in television documentaries and on late-night talk shows and news programs. A graduate of Columbia University and MIT, Mike lives in New York City, where he is a professor at Columbia and an advisor at the Intrepid Sea, Air & Space Museum. Visit him online at MikeMassimino.com and follow @Astro_Mike on Twitter and @astromikemassimino on Instagram.
If the item details above aren’t accurate or complete, we want to know about it. Report incorrect product info.