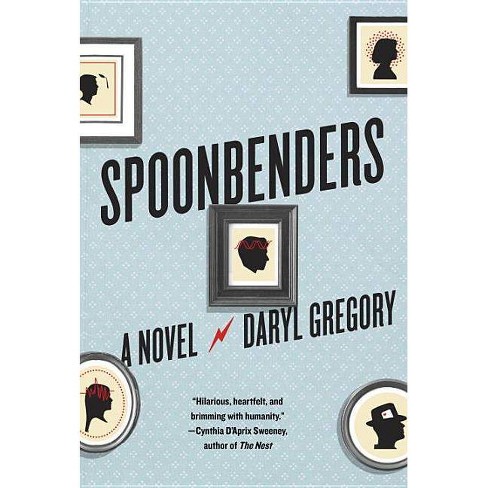 $16.99
no reviews yet
be the first!be the first! ratings
Shipping
Not available
Help us improve this page

"What Daryl Gregory accomplishes in his seventh novel is both magic and magic trick.... Gregory writes with humor and charm, offering up a rollicking and quick-paced plot tailor-made for summer." --Manuel Gonzales, The New York Times Book Review "Daryl Gregory's Spoonbenders takes a madcap look at the US in the latter half of the 20th century through the dysfunctional but endearing Telemachus family.... What follows is a hilarious, freewheeling caper involving Chicago gangsters and government secret agents, culminating in a satisfyingly bittersweet denouement." --The Guardian "With a wicked sense of humor, memorable characters, and a hefty dose of supernatural magic, Spoonbenders gallops.... Gregory's characters are simply magical -- in terms of both their abilities and their deeply recognizable humanity." --Pittsburgh Post-Gazette

"Gregory has a wry, clear, powerful voice, and his characters leap off the page. . . . This novel's resolution left me with a sense of genuine, unalloyed emotional uplift." --Alyx Dellamonica, Tor.com

"Superbly engaging, balancing delightful wackiness with genuine tenderness throughout in a way reminiscent of Michael Chabon or Jonathan Lethem." --NPR.org "The action is never-ending, it's fun, and the engaging plot is supported by a clever structure. I stayed up late into the night reading chapter after chapter, pulled in by yet another fantastic line that either made me laugh or gasp in surprise." --Sara Cutaia, The Chicago Review of Books

"A hilarious portrayal of family, schemes and a few superpowers thrown in along the way. . . . The level of emotional detail at work is astounding, and Gregory's magic touch makes even their strangest moments relatable. These characters' gifts merge with a brisk pace and a subtle, often bittersweet sense of comedy to make Spoonbenders an intensely endearing read. The premise will hook you, the plot will entice you, and then the Telemachuses themselves will make you fall in love." --BookPage "Masterful. . . . gracefully balances the outrageous melodrama of Chicago mobsters and shadowy government agencies with the ordinary mysteries of family dynamics. . . . Readers will emerge from the fray sure they know each Telemachus down to the smudges on their hearts. A skillfully written family drama that employs quirk and magic with grace." --Kirkus Reviews (Starred) "Gregory makes excellent use of the comic potential of hapless superpowers and sets up some intriguing mysteries, but mostly the novel is a celebration of family love and self-protection." --Chicago Tribune "This gloriously imaginative novel featuring a family of somewhat reluctant psychics has a nifty trick up its sleeve--as whimsical and eccentric as the Telemachus family is, their hopes and desires perfectly mirror our own. Spoonbenders is hilarious, heartfelt and brimming with humanity." --Cynthia D'Aprix Sweeney, New York Times bestselling author of The Nest

"Imagine amazing powers--but do so with uncommon creativity, rigor, and humor. You might, if you're lucky, arrive at the delicious drama of the girl who can smell lies; the all-at-once-ness of the boy who can't not see the future; the great dilemma of the psychic pressed into service as a spy. Daryl Gregory's novel traces the line where gift balances against curse and by the end, we realize he isn't only talking about amazing powers after all. Spoonbenders is X-Files meets The Sopranos with a real, roaring heart." --Robin Sloan, New York Times bestselling author of Mr. Penumbra's 24-Hour Bookstore "Did you spend a childhood convinced that you were *this close* to developing telekinetic powers? Me too! The supernatural may elude us still, but there is real magic in Daryl Gregory's gleeful story of the Amazing Telemachus Family. Spoonbenders is also about the power of belief and whether we can ever escape our tangled family legacies--and why we might not want to." --Jade Chang, author of The Wangs vs. the World "Daryl Gregory has written a novel as gripping as it is hilarious. The members of the Telemachus family may have powers beyond our own, but in telling their tale, Gregory reminds us of the bits of ordinary magic that are at the heart of every successful family. You will love this book." --Steven Rowley, national bestselling author of Lily and the Octopus "A big generational family story of longing, nostalgia and humor. The writing is so deftly charming and yet deeply felt. Spoonbenders is entertaining and moving--a perfect summer read." --Charles Yu, author of How to Live Safely in a Science Fictional Universe "A joyfully weird book about psychics and con artists, and the marvels that result from the intermarriage of the two." --Charlie Jane Anders, author of All the Birds in the Sky "Spoonbenders is brilliant. With the Telemachus clan, Daryl Gregory has created a family that is part J.D. Salinger and part David Foster Wallace. But the most impressive trick in the novel isn't how they read minds. Gregory's real gift is how he uses them to show the depths of the human heart." --Christopher Farnsworth, author of Killfile and Blood Oath
If the item details above aren’t accurate or complete, we want to know about it. Report incorrect product info.