Stack the Legal Odds in Your Favor - by Sara Naheedy (Paperback) 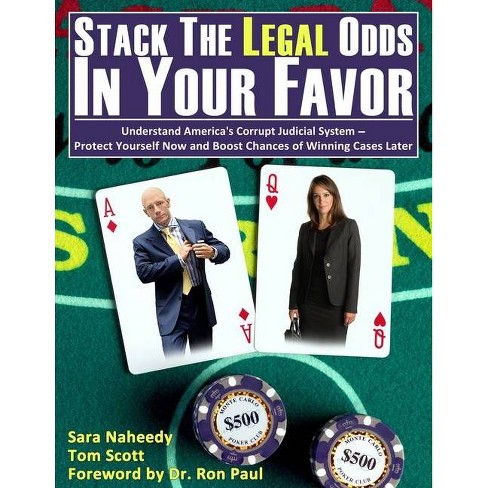 This highly acclaimed self-help book is the hybrid product of two authors. One is a lawyer, and one is not. This unique, synergistic combination resulted in an exceptional resource that contains essential information found nowhere else. Tailored for everyday Americans, the book is packed with unbiased data about the current state of the U.S. legal system: why it is the way it is, where it is headed, and, most importantly, how to beat it at its own game.

This is the only legal self-help resource that:

● contains the broad insight of experts internal and external to the U.S. legal system, giving you a complete 360° view of it

Coauthors Sara Naheedy and Tom Scott have 35+ years of combined legal experience in a variety of situations in and out of court, which they share in a practical, easy-to-read format. Learn about the wildly corrupt legal system before it strikes. In all probability, the question is not if it will strike but when it will strike the average person with little political power or influence. This guide is ideal as a preventative aid for such people who would unwittingly fall victim to the legal system or, worst-case, indispensable as a remedial tool for someone who needs a clearer understanding of or assistance with a current legal quagmire. Be best prepared to fight a traffic ticket and other vehicular citations and to handle small claims, landlord-tenant issues, debt collection, criminal accusations, divorce, wills, probate, and much more.

★★★★★ "The most important book written this century for Americans!" - Amazon Reviewer

Just how critical this book is to you cannot be stressed strongly enough--whether you realize it yet or not. Remember that being protected beforehand is far better than trying to repair the damage afterward.

*** SPECIAL NOTE FROM THE PUBLISHER: If you really want to fix the top problem plaguing the United States or protect loved ones, share this book with them or encourage them to pick up a copy. The authors have done their part by providing you the information, but they can't do it all on their own. You need to do your part. You need to spread the word. You need to take action. ***

Will you be prepared, not if, but when the legal system strikes?

Sara Naheedy has represented clients in real estate, immigration, employment, and business-related matters. She has practiced law in both the federal and state systems in California and was one of several attorneys who defended individuals and business entities in an $80 million federal RICO lawsuit in Los Angeles that was eventually settled through mediation.


She worked as in-house counsel for a property management company that she represented in numerous small claims lawsuits. Litigating small claims cases was a major influence on her view of the law as it affects ordinary Americans.


She understands the frustrations that most people experience when faced with the complexities and inefficiencies of the American judicial system and holds the view that it is often preferable to mediate rather than litigate. Sara has been practicing law since 2009. She received her Juris Doctor from Chapman University.


Tom Scott has withstood approximately two dozen duels with the legal system-some voluntary, most not. Being a novice initially, he wasn't very adept, but quickly learned how to turn the tables on the system and beat it at its own game.


He shares with readers what has worked and what has not worked for him when battling in courts in various states. As is mentioned in the book, he has defeated those who are supposed to uphold the law and has never lost to a lawyer when fighting him or her one-on-one within the courts.


Tom is the world's former top-rated fitness model and is a former college and semi-pro athlete. He is also an accomplished commercial model and actor, has an engineering degree, holds a U.S. patent, sponsors two children in foreign countries, is a certified personal trainer, and is coauthoring the health and wellness sequel, Stack the Health Odds in Your Favor, with fellow fitness pro, Susan Baxter, of New Zealand.