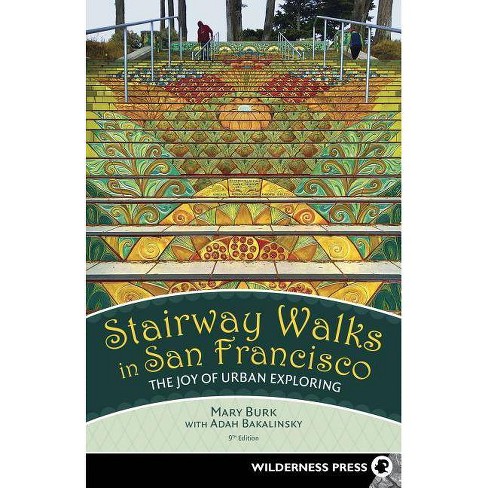 $11.59
MSRP$18.95
no reviews yet
be the first!be the first! ratings
Shipping
Free standard shipping with RedCard
Loading, please wait...
Help us improve this page

Mary Burk has been walking the stairways of San Francisco since the 1980s. While researching the city and its seven hills, she discovered Adah Bakalinsky's book and quickly fell in love with her unique way of bringing the city to life. Mary and Adah first met at a book event for the fourth edition at the San Francisco Main Public Library. The two became fast friends, bonding through their deep interest in exploring the city on foot. Adah shared with Mary how every walk has its own rhythm, and so the two of them began improvising new walks together. Three editions later, Adah passed the torch to Mary. But Mary and Adah still walk together and scout out new stairways and interesting routes for upcoming editions. When not out walking, Mary works as a software systems consultant and enjoys swimming and cooking. She shares a home with her husband, their two cats, and their 19-year-old catfish.

Adah Bakalinsky grew up in Saint Paul, Minnesota, surrounded by flat land. She remembers trying as a child to walk up icy Ramsey Hill (near Pleasant Avenue) in winter, slithering down, trying again, and finally reaching the top. Fifty years later, while walking the old neighborhood on a visit, she discovered that a stairway had been built to ascend the hill! Looking for a synthesis for her backgrounds in social work, music, and film, she discovered, surprisingly, that it was walking. She walks, and as she walks, she talks to whomever will talk with her. She carries a tape recorder to capture stories; she finds that walks shape themselves into a variety of musical forms and dances, and she redesigns a walk until it has just the rhythm it must have. She walks to see and returns to photograph the objects that give flavor to the walk. She feels lucky to live in San Francisco, where walking seems the most natural way to traverse the city. Happy heeling, frisky footing, and merry walking!