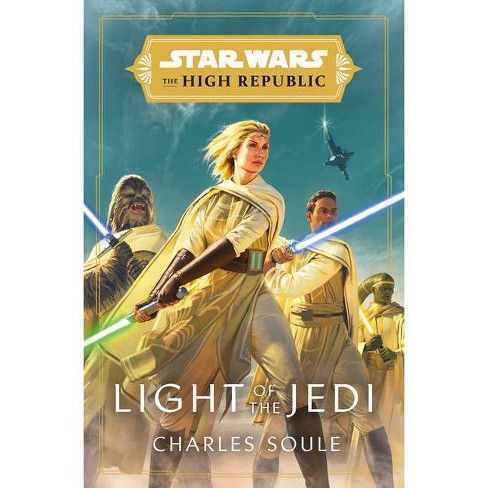 "The lead book in an exciting cross-publishing event, exploring a new era of Star Wars storytelling: the never-before-seen in any medium High Republic"--

#1 NEW YORK TIMES BESTSELLER - Long before the First Order, before the Empire, before even The Phantom Menace . . . Jedi lit the way for the galaxy in The High Republic

It is a golden age. Intrepid hyperspace scouts expand the reach of the Republic to the furthest stars, worlds flourish under the benevolent leadership of the Senate, and peace reigns, enforced by the wisdom and strength of the renowned order of Force users known as the Jedi. With the Jedi at the height of their power, the free citizens of the galaxy are confident in their ability to weather any storm But the even brightest light can cast a shadow, and some storms defy any preparation. When a shocking catastrophe in hyperspace tears a ship to pieces, the flurry of shrapnel emerging from the disaster threatens an entire system. No sooner does the call for help go out than the Jedi race to the scene. The scope of the emergence, however, is enough to push even Jedi to their limit. As the sky breaks open and destruction rains down upon the peaceful alliance they helped to build, the Jedi must trust in the Force to see them through a day in which a single mistake could cost billions of lives. Even as the Jedi battle valiantly against calamity, something truly deadly grows beyond the boundary of the Republic. The hyperspace disaster is far more sinister than the Jedi could ever suspect. A threat hides in the darkness, far from the light of the age, and harbors a secret that could strike fear into even a Jedi's heart.

"Sharply written and intensely enjoyable."--/Film "The action is breathtaking, and the power on display is remarkable. Soule fulfils his promise to redefine the Force."--Screen Rant

Charles Soule is a Brooklyn, New York-based novelist, comic book writer, musician, and attorney. His novels include The Oracle Year and Anyone: A Novel. While he has worked for DC and other publishers, he is best known for writing Daredevil, She-Hulk, Death of Wolverine, and various Star Wars comics from Marvel Comics (Darth Vader, Poe Dameron, Lando and more), and his creator-owned series Curse Words (with Ryan Browne) and Letter 44 (with Alberto Jimenez Alburquerque).
If the item details above aren’t accurate or complete, we want to know about it.

Star Wars: Shadow of the Sith - by Adam Christopher (Hardcover)

Star Wars: The High Republic: Chronicles of the Jedi - by Cole Horton (Hardcover)

5 out of 5 stars
Would recommend
babyrancor - 5 months ago
light of the Jedi sets the stage for a new era in the Star Wars universe. there is a lot of interesting new force abilities as well as new lore for the Jedi. being part one of a new era this book does a lot of heavy lifting in terms of explaining the state of the universe and explaining the status quo, but once the ball starts rolling it comes to an exciting climax that satisfies as well as sets up the conflict to come.
Did you find this review helpful?

Too many characters. Not enough story.

1 out of 5 stars
Would not recommend
Jordan - 1 year ago, Verified purchaser
This book is a hodgepodge of too many characters and too much of nothing happening all at once. Highly disappointing.
Did you find this review helpful?

5 out of 5 stars
Would recommend
Silver - 1 year ago, Verified purchaser
Very cool to experience an era not shown in the movies. It’s nice to see the Jedi at their peak, as during the prequels they have waivered.
Did you find this review helpful?

A slog to read

1 out of 5 stars
Would not recommend
lostzelda - 2 years ago, Verified purchaser
I was excited to read this, but I couldn’t even get through it. I kept reading hoping it would get better - it didn’t. There was a lot of “as you know” expository jammed into chapters. I also just found it hard to read, and I have read a lot of Star Wars novels. Something about how much it jumps around and introduces so many worlds and characters in the first 100 pages made it not enjoyable. It didn’t build the world in a way where I felt invested. Anyway, just my opinion. This one was definitely not for me.
Did you find this review helpful?

Long ago, the Jedi and the republic stood strong...

5 out of 5 stars
Would recommend
Jojorabbit - 2 years ago, Verified purchaser
I’m not sure why so many have given this a bad review, but to each their own. I personally loved this novel. It is incredibly hard to put down. It has complex characters, epic implications for the new cannon, and does not shy from hard difficult topics such as death and disorder amongst tragedy. It is a well paced, very well woven novel, with storylines that sync for an excellent ending and cliff hanger for further series. If you take a step back and go into the novel without preconceived notions, this is a must read for Star Wars fans!
Did you find this review helpful?

Not as good as it could have been

2 out of 5 stars
Marty - 2 years ago, Verified purchaser
Unlike other recent SW books this one is full of unnecessary / filler "fluff". Should have been a short story. The Jedi Order looks weak and useless by a non-Force dominant adversary (why???). Will not buy another book from this author / series.
2 guests found this review helpful. Did you?

1 out of 5 stars
Would not recommend
SaunDann78 - 2 years ago
In keeping with what seems to be the new Disney tradition, this isn’t Star Wars. I’ve been reading Star Wars novels since the early 90’s, and this is modern dribble that reads like The Hunger Games, or Divergent. If this book appeals to you, you’ve joined the SW fandom late in the game.
2 guests found this review helpful. Did you?

5 out of 5 stars
Would recommend
Hotmessmammy - 2 years ago, Verified purchaser
Didn’t put this down.
5 guests found this review helpful. Did you?

We Are All the Republic

5 out of 5 stars
Jake - 2 years ago, Verified purchaser
The new High Republic era of Star Wars begins with a novel that feels every bit as cinematic as the films and shows in the universe thus far. A deep and rich world envelops characters and a story that will grip you in the very first pages. Everything here feels distinctly "Star Wars" while maintaining its own identity. No matter what you've thought about Disney's other entries into the Star Wars timeline, Light of the Jedi will leave you feeling a sense of excitement for everything that is to come.
8 guests found this review helpful. Did you?

5 out of 5 stars
Would recommend
IDK - 2 years ago
I’m at the half way point of the novel and so far it’s amazing, the opening chapter hooked me in. The pacing of the story is really good and the characters are all amazing and like able. The story takes place around two centuries before Episode 1, so this a fresh breath of air. Star Wars fans will be pleased with this book.  
13 guests found this review helpful. Did you?