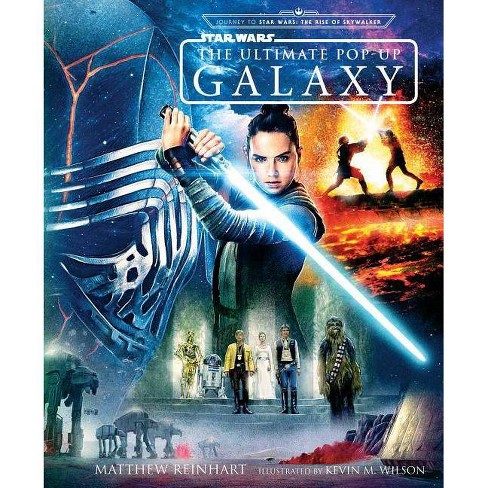 Just in time for the release of The Rise of Skywalker--a thrilling pop-up journey through the entire Star Wars saga by pop-up legend Reinhart. Presented in a dynamic 360-degree format that enables the action to be viewed from all sides, the book also opens up to form a displayable 3D diorama of the entire saga.saga.

2020 IBPA Awards Winner! "I honestly can't recommend this book enough" Starwarsnews.net "This book takes things to a whole new, and massive, level. Magnificent to behold" Geekdad.com From famed New York Times best-selling paper engineer Matthew Reinhart comes Star Wars: The Ultimate Pop-Up Galaxy. This glorious pop-up book is a fitting tribute to the entire Star Wars saga, from A New Hope to The Rise Of Skywalker See Padmé battle alongside the Jedi and clone troopers, Luke train with Jedi Master Yoda on Dagobah, and Rey and Kylo Ren battle Supreme Leader Snoke's Praetorian Guards, as well as other memorable moments from the saga. With five amazing scenes rich with detail and secrets that fold out into one breathtaking map of the entire Star Wars saga, Star Wars: The Ultimate Pop-Up Galaxy is the perfect gift for boys, girls, and Star Wars fans of all ages. --The Entire Star Wars Saga. Featuring all 11 Star Wars movies, including A New Hope, Rogue One, Revenge of the Sith, and The Rise Of Skywalker.
--Illustrious Characters. Jedi, Sith, royalty, and rogues are all featured. See Han Solo, Princess Leia, Chewbacca, Finn, Poe Dameron, Mace Windu, Darth Sidious, General Hux, Supreme Leader Snoke, and more!
--Legendary Locations. See locations come to life, including Geonosis, Mustafar, Yavin, Tatooine, Crait, Endor, and, of course, the notorious Death Star and the fearsome Starkiller Base.
--Iconic Moments. Witness battles and duels from across the saga, including the Jedi's heroic struggle on Geonosis, the battle of Hoth, Obi-Wan Kenobi's tragic duel with Anakin Skywalker, and Anakin's rebirth as the fearsome Darth Vader.
--Famous Vehicles. See the Millennium Falcon, Star Destroyers, X-wings, TIE fighters, snowspeeders, AT-ATs, and other vehicles from the saga.

"The Ultimate Pop Up Galaxy is a feat of paper engineering. It's a beautiful 3D homage to the Star Wars saga. We're not strangers to pop-up books here at Word Wednesday, but this book takes things to a whole new, and massive, level. Magnificent to behold." -- "GeekDad.com"

"I would recommend it for adults, but certainly kids can enjoy it as well. It will make a wonderful gift this season for any Star Wars fan."-- "Mousesteps"

Matthew Reinhart studied industrial design at the Pratt Institute in Brooklyn, New York, before finding his calling as a paper engineer. His books include the best-selling Star Wars: A Pop-Up Guide to the Galaxy, Game of Thrones: A Pop-Up Guide to Westeros, and DC Super Heroes: The Ultimate Pop-Up Book, among many other award-winning titles. He lives in San Francisco. Kevin Wilson has exhibited his work globally and worked with clients such as IMAX, Marvel, and Bad Robot. He lives with his wife and two daughters in the south of England.
If the item details above aren’t accurate or complete, we want to know about it. Report incorrect product info.